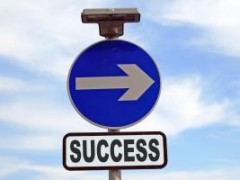 As the GES 2013 is all about redefining success, I asked myself what personal success actually means. Has it to do with economic benefits such as a great car, a big house and a well-paid job? Or has it to do with having a partner and/or a family? Or enjoying good times with your friends? Or being a good Christian or Muslim or follower of whatever creed? Or perhaps it has to do with helping other people by engaging as a volunteer?

Success is such an important and difficult question that I find it practically impossible to define what it means. But I’ll try – even though an imprecise definition of success means that you don’t have a benchmark against which to measure it.

In my view success is something very personal – so for people with high career ambitions, promotion and a step up the career ladder will mean much more than it does for a family father who loves playing with his kids in the park after work. But if success is a very personal private affair, why are people constantly  comparing themselves to others, and describing themselves  – or others  – as successful?

I would suggest keeping success a private affair. It should be up to each one of us to judge our own degree of success – not in comparison to others, just in terms of  how far we’ve been successful in achieving our own goals. This degree of personal success should be enough to satisfy nearly everybody.  As things go today, you’ll always find someone who is “more successful” in something or other. Some people might see such success as a motivating incentive for something they should strive to emulate. But for the few that see it as a spur to action, there will always be many more who find it alienating and discouraging.

But be careful: because to measure success purely against your own set targets makes failure to achieve them that much harder to bear. As you will always  compare yourself to “more successful” people, you always have the possibility of setting your benchmark against those who perform “less well”. So if you won’t be the best, at least you have the consolation of not being among the worst.

So in my view the best way to be more successful is to stop competing in this “Race for Success” and just be more satisfied and happy while doing your own thing. This will brighten your outlook as well as your “performance” at work or with your families and friends.

But these are just some preliminary thoughts, so please feel free to share your own views. What does success mean to you? Do you think that the success of one always entails the failure of others? What drives you and motivates you from day to day? Is it perhaps thoughts of success??