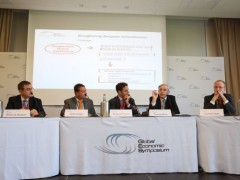 In the previous weeks I have written about some of the shortcomings of the EU and how they might be addressed. My main focus was on structural weaknesses and ways to address them individually and on a general push for a leaner laissez-faire state decisive and courageous enough to intervene in times of crisis. But there is one critical topic I have avoided so far, one that has cropped up quite a bit at the Global Economic Symposium, Innovation.

A good straightforward point that is worth repeating was made in the opening plenary session by John Bryant who said that our consuming goal as individuals in a market society has become to make money, even though money is a by-product of a market society, not an end goal. The end goal should be to excel at something, and if Europe has ever excelled at anything it has been innovation. Innovation has been the basis of European development for over the past five centuries and the engine that has propelled Europe and the western world in general forward.

There is, however, a widespread feeling that Europe has now lost its drive for innovation which has been strangled by bureaucratic regulations and labour union demands. This is, unfortunately, not far from the truth. Europe is over-regulated in a lot of fields and vested interests in both the labour and  employer sectors are indeed throttling its competitiveness. And the eurocrisis has done little to improve that. Meanwhile, pockets of the eurozone have been flourishing even in the teeth of adversity. Ireland, one of the countries hardest hit by the recession has had a booming high tech sector because of the measures it has taken. And this is what the EU needs. This and the magic of the German Mittelstand.

Mittelstand is a German term meaning the medium-sized enterprise sector, and more and more economists nowadays are attributing the German economic miracle to such medium-sized enterprises. Over the years they have thriven in an environment that encourages competition and private investment and have offered continual employment to a strong German blue-collar working class. The Mittelstand is Capitalism in its purest form, a company that is big enough to make an impact and generate wealth in its host community yet is not ‘too big to fail’ or even too big to adapt to market changes. And surprisingly enough, it is from some of these medium-sized enterprises that the biggest innovations have emerged.

This is exactly the type of labour and investment environment that a United Europe should strive to create. While there is no competing with countries like China and the Asian tigers in terms of cost, European industry can compete on the turf of quality and innovation. Only to do so, it must first nurture a strong market economy and more competitiveness and break free of the welfare state tailspin.

The sustainable energy sector, even though beset right now by a whole host of problems, could be the initial boost that the European economy so desperately needs. A re-envisioned energy infrastructure that would take full advantage of the reusable energy resources around Europe, from still-faulty wind in the prosperous North to the limitless potential of solar in the economically depressed south could be the catalyst for such an industrial upturn. What’s more, Europe is in dire need of sustainability and energy independence, and there is an oft irrational resistance to nuclear power nearly everywhere. But sustainability and energy independence are impossible goals given the current angry bickering between EU states and an economic climate resistant if not outright hostile to market forces.

The EU can flourish industrially and become a new post-war Germany. But this will never happen without strong German leadership and European cooperation in a market-friendly environment. And right now all of the above are singularly lacking. But if I’ve learned anything here in Kiel, it is that there is a desire to save Europe and there are also people with the right know-how to do it.