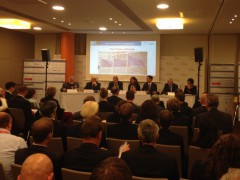 During these past few months I have been closely following Mr. Soros’ work and his ongoing debate with Hans-Werner Sinn over what the best solution might be for the eurozone crisis. In general I tended to lean more towards Mr. Soros’ perspective as I felt, and still feel, that austerity is not working out well for anybody and is increasing tensions within an already fragile multi-state construct. So I had come prepared for the plenary session on the future of Europe, I had done my homework and was ready  for a structured debate on austerity.

But then I had attended two very strange, almost metaphysical session on the same day that took more original approaches towards the economics of happiness and growth than even the most diehard Austrian schooler would ever dream of.

So it is perhaps excusable that when Mr. Soros started to present his framework for saving the EU as a ‘holistic’ one my thought immediately jumped to holistic medicine. Could Mr. Soros be prescribing chamomile tea now for the EU instead of eurobonds? Fortunately that reverie didn’t last long as Mr. Soros launched himself into a structured framework for boom-bust cycles based upon the almost praxeological principle of man being uncertain by nature. His thesis is that this uncertainty makes it impossible to create proper “laws” similar to natural laws when great numbers of individuals are involved and that it is impossible to produce good predictions.

Mr. Soros went on to apply this framework to the eurocrisis and underlined that while the EU was initially a structure devised for maintaining European stability and generating wealth in a common market, it has turned into a creditor-debtor relationship, with Germany, because of its resistance to fiscal ammendments and high credit rating, becoming the de-facto, albeit highly reluctant, hegemon. Thus, Mr. Soros reiterated his longstanding thesis that only Germany can change the current status quo, save Europe from stagnation and earn its gratitude in the way the US did after the Second World War.

The rest of the panel presented some interesting points as well but I won’t touch on them for lack of space. It is important to know though that Mr. Soros is not the only one looking to save the eurozone from itself. As Minouche Shafik pointed out, a recent (and extremely good) IMF White Paper provided a very good look at what an EU fiscal union could look like and even what such an union could have done to protect the eurozone during the crisis. The overall conclusion of the panel was bittersweet. The eurozone will be looking at a slow descent into stagnation if radical steps fail to materialise (and that is a tall order in a bureaucratic unanimity nightmare like the EU) while Europe will be on the brink of  long term stagnation and possibly dissolution.

That, unfortunately, is my perspective as well. THe EU needs reform and it needs radical reform. Over the past few months I have been slowly arguing for a more laissez-faire, more centralised, possibly more federalised European state. A workfare state that does not neglect its citizens, a free market where all goods, labour and capital are free to move and are not held back by petty national or even local interests and a strange sense of North-South schadenfreude. Of course for this , as Mr. Soros said, we need German leadership and not of the prodding towards austerity kind. Innovation, privatisation and federalisation have been hallmarks of the ‘German Miracle’. Why shouldn’t this work for Europe as well? A great deal of political willpower is required but, finally, the election season in Germany is over. Perhaps now we can have some serious reform.

I’ll leave you with Mr. Soros’ closing remark, clumsily paraphrased from memory. The way things are right now, stagnation lies ahead. But stagnation is not necessarily terrible for a nation state. Japan has endured it for decades. Latin America has bounced back despite its ‘lost generation’. But the EU is an association still in formation, not a nation-state, and what we are facing is the breakdown and dissolution of the EU. And that is something that we should do anything to avoid.