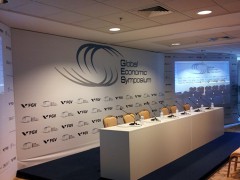 The following article deals with the topic “The Future of Central Banking: Inflation Targeting vs. Financial Stability,” which is currently being discussed at the Global Economic Symposium in Rio.

“Whatever happened to liberalism?” is the question that keeps ringing in my mind after attending the Global Economic Symposium panel on the future of central banking, the topic I’ve been covering for this blog. It’s astonishing to find that, if the panel composition is any representation of the mainstream on the subject (and I suspect it is – it included prominent academics and former central bank officials), massive central bank intervention in markets and regulation is at least here to stay, if not to be substantially broadened and deepened. Nobody suggested, in any aspect, that it would be better to let the economy heal itself.

I wrote in a previous post that central bankers have become the quintessential technocrats, and it emerges almost as a consensus from the panel that they should concentrate even more discretionary power. One of the failures of central banks that led to the 2007/2008 crisis, one panelist said, was that either central banks had little information on what was going on in banks’ balance sheets or didn’t have a mandate to intervene preemptively in markets.

All panelists suggested central banks should keep buying financial assets: not only government bonds but, desirably, also corporate bonds and mortgage backed securities. Everyone apparently ignored the harm such large players can do to the system of market prices and efficient capital allocation – what incentive do savers have to invest in innovation, for instance, if you can simply hold the same assets central banks will buy and have it almost guaranteed that those assets will rise in price?

There’s great conviction that the central banks of the developed world are on the right track – they prevented a collapse in economic activity and are taking actions that will lead to a sustainable recovery in some more or less distant future. I can concede a collapse was indeed avoided, but the view that central banks should keep a heavy hand over the global economy is much more problematic. First, nobody really knows when (and if) economic growth will resume in the developed world, but there’s probably a point (and maybe before that) when intervention starts to cause more harm than good. Second, I still see independent central bank actions beyond simple objectives as a deviation from democratic principles. There’s a flip side to central bank independency: it worked in a much different and simpler landscape; now elected politicians should be bold enough to take measures and to be accountable for them, instead of hiding themselves behind technocrats with an aura of prescient scientists.

Crisis has been showing central banks have an important role to play, but I think it would be better for democracy if this role was contained to keeping inflation under control and maintaining a sound financial system. Free markets and policy makers have also proven to have crucial roles to play in capitalism, and those are at risk of being obfuscated by growing omnipotent central banks. Can anyone in the center of the debate raise a hand for liberalism?