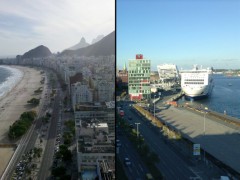 I was privileged to be a blogger at the GES 2012.  That was my first time at the symposium, and I was really excited to be there and meet so many interesting people (and the fact that it was in Rio de Janeiro helped too!). So when I knew I would be at the GES 2013, I had great expectations. As I already knew how it worked, I could focus more clearly on the panels and speakers themselves and the solutions they put forward.

The GES 2013 was held in Kiel, in north Germany, once more bringing together a distinguished congregation of people, and during its two days, dozens of panels took place presenting the opinions and ideas of specialists and people from many different backgrounds.

My special topic of interest this year was on the panel: “Can Religion Help Solve Global Problems?”  I did my homework and in the run-up to the GES, I published posts discussing the topic from my perspective as a Brazilian and a believer. I talked about such matters as the dynamic of Protestants beliefs and African-Brazilian religions; the role of Catholicism in Brazil; how religions can empower women and address gender inequality, what religions can learn from atheism and atheism from religions, and I gave examples of global problems and how religions can help to solve them.

The eagerly awaited panel itself was quite different from all the others: instead of a lecture by specialists sitting behind a table on a podium, the speakers sat at the same tables as the audience and discussed the topic over dinner.

The dinnertime discussion on “Can Religion Help Solving Global Problems?” at the GES 2013. Photo taken by the author.

Well, the dinner itself was excellent but unfortunately the speakers at the dinner discussion didn’t offer many real solutions. I was disappointed that some questions that should be disscussed weren’t even mentioned, questions such as: Are there lessons from religions that could be usefully applied  to the financial crisis? What steps (if any) are being taken to combat gender inequality in religions? What are speaker’s opinions about fundamentalism and non-secular governments? Rather than address such issues, the speakers tended to talk in general terms about the importance of religion, and why society must end violence. I could not avoid the feeling that some  of these shared ideas were neither new nor practical.

Yet all was not gloom. The good news is that when I left the symposium I could pack some newly learnt lessons in my luggage. I noticed, for instance,  that when the audience participate, the answers from the panelists were much more interesting.  I saw that the best speakers, those who really knew their stuff, knew their facts and numbers and examples by heart, and were eager to discuss them (special kudos to Irene Natividad and John Hope Bryant here!). And I learnt that everyone at the GES was first and foremost a human being, and not an academic, leader or CEO (thanks for this lesson, Matthieu Ricard!).

However, the best part of these two energizing days for me was the focus of this year’s symposium – Redefining Success. What Redefining Success means is that we as a society have to rethink what we know. In practical terms this involves not just redefining what we mean by “success”, but redefining our roles, concepts and ideas. Some of these are now in the process of being redefined (think gender equality, freedom of religion, etc), but we still have a lot of work to do to focus these changes on the economy and society as a whole. The symposium showed me that we need to step back a moment and reflect on such questions as:

– Does a person really need to be very rich to be happy? How much is rich? Where is the line between working too much and working too little?

– Why do countries focus so much money and effort on immigration laws and border security? Why aren’t people allowed to live anywhere they want?

– Why can’t industries make more durable products, so we don’t have to buy new stuff every time? And by the way – why do we have to buy so many clothes?

The central message that I took away from the symposium is that if we really analyze the world we live in, there are thousands of concepts that need rethinking and new definitions. Sure, big concepts and laws can be left to big politicians and CEOs and billionaires. But most ideas for changing life begin in small ways in the home, during little talks with the family or a dinner with friends. Ask yourself: who said you have to live your life this way?