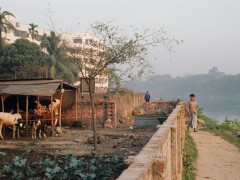 The following article deals with the topic “Promoting Food Security: The Contribution of Climate Smart Agriculture”, which is currently discussed at the Global Economic Symposium in Rio. The author intends to enrich the discussion at the symposium with his personal stories and ideas.

A farm sprouts in Dhaka, the capital of Bangladesh. Photo by everymosquito, Flickr/Wikimedia CC BY 2.0.

In the climate -sensitive era post Rio +20, the optimism of the Green Revolution seems like a distant memory.  In the late 1960s, technological advances in irrigation, crop genetics, and fertilization prevented billions in India, China, Mexico, and other developing countries from starving as yields of basic staple crops like wheat and rice rose dramatically. Flash forward to 2012, and a panelist from a Brazilian university speaking at the Global Economic Symposium’s morning off-the-record session, “Promoting Food Security: The Contribution of Climate Smart Agriculture.” He explained how subsidized energy in India meant that farmers were pumping water 24 hour a day to irrigate their fields without any concern for this wanton use of resources. But this is no longer the ’60s, and we know that water may fall from the sky, but that doesn’t mean there is an infinite supply. Sure enough, leaving the proverbial faucet on was straining groundwater reserves.  Luckily, the panelist explained, a compromise solution was reached to reduce electricity to 8 hours per day for pumping, which is more than sufficient for the Indian farmers’ needs.

Such an effort is an example of what 21st century climate scientists and agronomists call “climate smart agriculture,” or farming techniques that sustainably increases yields, reduces greenhouse gases, and help countries reach their food goals. Food production is a hot topic right now after 2011 brought the highest ever average global food prices. The brunt of this stress on everyday life is unsurprisingly born largely by the poor in developing countries, and as such 2011 saw a spate of food riots that threatened to rival a worldwide outbreak in 2008 when prices spiked.

The aforementioned Brazilian academic explained that he is co-authoring a study together with the U.S. Food and Drug Administration on the reason behind the hike in prices that should be ready in 3-4 months. Certainly, short-run climate problems (droughts and the like) and huge demand increase from India and China for proteins played a role. However, their preliminary results suggest so far the main reason was pure and simple financial speculation.  The Chicago Board of Trade, the world’s main trading exchange for agricultural commodities, showed that in the last four years, the number of purchases for corn futures has increased eight-fold and for soybeans threefold.  Who is buying up all these crops and artificially driving up prices?  Hedge funds, because of low opportunity costs.  The panelist flatly stated: “It [the rise in prices] has nothing to do with anything else.  Only the greediness of the hedge funds.”

Shifting gears, the role of politics also occupied a lot of attention.  Small examples were cited, like an effort to grow elephant grass as biofuel in Haiti that could easily power all of Port-au-Prince, but which was shelved because of political issues. Looking locally, many of the panelists and the audience spiritedly discussed the Brazilian Forest Code, which was a hot button political issue in Brazil last year and early this year, finally getting President Dilma’s imprimateur with caveats (aka, a line-item veto of some provisions) in May. Brazil has some of the world’s largest forests reserves. As such, even slight changes in legislation about how much land has to be preserved on agribusiness farms, how high up a slope, or how close to a river one can plant affect millions of hectares and can cost or save hundreds of millions of dollars for the agriculture industry. Sadly, the stakes were so high that rainforest activists were assassinated for their advocacy work. A panelist familiar with the debate proffered, “My humble opinion is that we reached something reasonable. Transparency International didn’t like it, the big farmers didn’t like it, which is good because it was in the middle.”

Finally, Brazil was lauded by an NGO expert on agriculture for being “extraordinarily skilled at cheap and effective remote sensing monitoring via satellite, to let you know at a granular level exactly where habitat conversion is taking place.” This kind of knowledge is important because habitat conversion — that is to say, burning forest or other natural land cover to make way for planting — is the single biggest contributor to greenhouse gases. With the information that the Brazilian government collects, they are then able to set pre-conditions for penalties and establish incentives to channel habitat conversion into areas that have already been cleared. Ultimately, effective remote sensing allows all players – governments and civil societies – to know what’s happening on the ground. As the panelist succinctly explained, “If you don’t know what’s going on, you can’t address it.”

While he concluded that these efforts should be expand, particularly to Africa, another commented, “There is no model solution, please don’t try because it doesn’t exist.  All solutions must be tailor made.  I’m 60 years old, there are no magic hats,” he concluded with a harrumph.