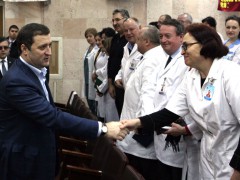 Global healthcare spending has increased faster than global economic growth. This faster pace of growth is due to the lack of effective economic and health policy-making but is also driven by the global economic crisis and the growing number of people using health services. When it comes to healthcare, all stakeholders – patients, service providers, pharmaceutical companies and governments – know that something needs to be improved. In addition, in the view of healthcare beneficiaries spending on healthcare can never be enough, and the state should always do more. What is needed are new and better models which address the overall healthcare ecosystem. This ecosystem includes health infrastructure and its quality, health education and distribution networks.

In order to ensure a sustainable health system, it is not sufficient just to increase the funding allocated for healthcare, communities also need to be helped in building programs and society as a whole should engage in promoting healthy standards.

Moldova has increased total expenditure on health by 19.1% from 2009 to 2012. In 2012, more than 80% of population had health insurance coverage. Compared to 2009, when only 485 types of medicine were reimbursed, in 2012 943 types of drugs are now paid for by the state. (www.statistica.md; Ministry of Health). Also, the mortality rate associated with tuberculosis has decreased from 18 deaths per 100,000 inhabitants in 2009 to 13. 7 deaths per 100,000 inhabitants in 2012. These, and many other similar examples, represent small improvements that have been made to the health system.

The Moldovan government has high ambitions in terms of what should be achieved in 2013. Projects include the construction and renovation of health centers, a new surgical block equipped with cutting-edge technology and an imaging center, a Bone Marrow Transplant Center, new medical equipment for 5 hospitals, the outsourcing of non-medical public healthcare institutions, the roll-out of a mobile emergency service for resuscitation and extrication, screening for early diagnosis of diabetes, and the launch of antismoking campaigns.

The health reform has triggered various opinions, mostly negative. Reforms are, by default, aggressive and painful, in particular for the specialists who have been in the system for too-long. The ambitions of improving the health-care services include policy reforms, which would create competition in the system, would reduce corruption and create barriers for it and would most certainly make people leave the system. Moreover, the reform aims at providing affordable health services for the population, using instruments such as the public-private partnership, which is unknown and thus not agreed by many.

A study conducted by the Center for Health Policies and Studies  conducted a study on the operations of public sector hospitals, but also the impact of policies and health interventions.

Assessment of technical efficiency of municipal hospitals show that only 3 hospitals (43%) of hospitals enrolled in the study recorded an optimum level of efficiency in the use of beds fund.

The study showed that efficiency measures for district hospitals should be made in terms of geography and population (regionalization and the creation of regional hospitals). Efficient hospitals in Chisinau can be achieved by merging them and creating balanced entity in terms of capacity and merge of  resources-results. The republican health institutions can be more efficient only if they will be reorganized by merging with other Republican hospitals.

In particular these measures trigger great revolt and anger.

The most important aspect of all these services and facilities is the fact that in all countries healthcare services are subsidized by the taxpayer, thus there is no market where prices are determined by the laws of supply and demand. Subsidized services should be delivered by qualified providers, regardless of whether they are public or private, for profit or not for profit.  Therefore, what is expected from the elected representatives is meaningful policies and accessible healthcare services.

Training and education is another aspect of improving the healthcare system. Best practices prove that health educators who organize health camps do help to make distribution of health services easier. The “mobile clinics” that provide access to health screening, and a robust portfolio of treatment options can reach everyone, especially people in rural areas.

The health ecosystem should be seen by policy-makers as a complex and difficult system in which every element has its own vital role to play. This is important for society, for government and for the people.