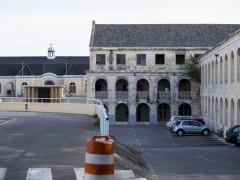 St. Elizabeth Hospital in Curaçao. Photo taken by the author (2013.)

When I was in high school, a family member was admitted to St. Elizabeth Hospital (SEHOS) in Curaçao. I’d been there before but this time while visiting I realized just how neglected the place was. Then one day, a nurse told me that the hospital had run out of oxygen, and was waiting for the tanks to be refilled. This was an eye-opener for me and I realized that: (1) SEHOS did not have adequate facilities to treat its patients, (2) regardless of the type of insurance a person has, it’s pretty useless if proper facilities are not available to treat them, and (3) more often than not, no matter how highly trained they are, it’s the doctors and nurses who get blamed for conditions they have no control over.

SEHOS is the only public hospital in Curaçao, and it’s lacking in the resources needed to provide the best level of care to its patients. Earlier this year, a Dutch newspaper went so far as to say that the hospital and the two private clinics on the island should close their doors immediately. Needless to say, healthcare professionals on the island do a wonderful job – doctors, for instance,  still go to work even though the government has not paid their salaries for months. However, without the proper equipment, doctors simply cannot do their work properly. Until recently, SEHOS did not even have a pressure tank, which made the island an unsafe place for diving which is a regular leisure activity for tourists and residents alike. Earlier this year, the intensive care unit at SEHOS  (the only ICU ward on the island) declared that they could not accept any new patients as a bacterium had infected the ward.

Although healthcare facilities on the island are in a terrible state, the government recently passed reformed a law regarding universal healthcare insurance. Simultaneously however, Curaçao’s financial situation puts the government in an uncomfortable position. It is under increasing financial pressure from the Netherlands to restructure its finances, as the island’s spending remains higher than its income, and widespread corruption has resulted in increasing debt. This pressure from the Dutch is matched by social pressure from the island’s poor who depend on government support for welfare and insurance, particularly as youth unemployment is on the rise in the wake of the severe recession. In response to this, on February 1, 2013, the government of Curaçao introduced the Basic Health Act designed to ensure that all citizens have basic health insurance coverage, while also appeasing Dutch financial concerns and harmonizing the fragmented healthcare sector under Basisverzekerings Ziektekoste or Basic Healthcare Insurance (BVZ).

The Act introduces a scheme that makes insurance mandatory for all citizens and residents of Curaçao, except those fully protected by private insurance companies or covered under other mechanisms of Dutch or international law. In line with Dutch recommendations, the plan reflects the austerity measures taken by the government which place a greater financial burden on individuals and employers. Insurance is paid through a nominal premium and an income related premium. At the start of the fiscal year, every person over the age of 18, no matter what their income is, has to pay the nominal premium which is 82 Antillean Guilders (approx. 35 Euros). This rate did not exist before. The income related premium has been raised to 12% of a person’s annual income, 9% of which has to be paid by employers and up to 3% by employees. Anyone earning less than, or the equivalent of, the minimum wage (12,000 Antillean Guilders per year) is exempt from this income-based premium. The amount is levied at 100,000 Antillean Guilders per year, whereas it used to be just over 60,000. Additional packages for first or second-class care in clinics or hospitals can be purchased at an extra charge. While this system allows for everyone in Curaçao to receive basic health insurance, private insurance schemes are cheaper than this public coverage when it comes to supplementary insurance costs.

While this new system does ensure that some form of health insurance covers every person on the island, it does have its flaws. Apart from the obvious financial burden, conditions that used to be covered by basic health insurance, are no longer covered, including dental or ophthalmological care and prescriptions. Furthermore, basic health insurance only provides a person with a third-class six bed hospital room without airconditioning. Given that average temperatures on the island range between 24- 30 degrees Celsius, airconditioning is by no means a luxury.

While I have to admit that healthcare reform was necessary, I think that serious improvements in facilities should have been made before a new insurance scheme was introduced. While talks of a new hospital have been going on for quite some time now, no action has been taken in this regard. With no improvements to hospital amenities, and with no dental or ophthalmological care, third-class insurance on the island is coverage on the most most basic level that leaves citizens with facilities that are not fit to purpose and that may even be detrimental in some cases. Although the island has many doctors who put much time and effort into the system, often enough the equipment available (or the lack of it) puts patients at risk. There is little rationale in providing people with insurance for substandard amenities, and for clinics and hospitals that have been advised to close down.