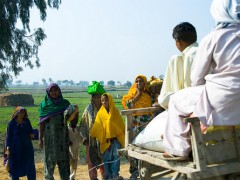 Women make up 48% of Pakistan’s total population. The female literacy rate stands at 36% and on average a Pakistani woman is married off at the age of 19. Currently, 62% of Pakistani women (of child bearing age from 15-49) are married, while 3% are widowed or separated and 35% never married.

Reading these statistics, you might wonder why I am focusing on women and marriage so strongly. Here is why: women have always been the most disadvantaged group in Pakistani society. In a strongly patriarchal society, it’s the Pakistani man who is supposed to bear the burden of everything to do with “finance”. This is the reason why only about 20% of women in Pakistan have any share in the labor force (according to the International Labor Organization 2007). While it may sound very hard for the men to be the only breadwinner in the family, unsurprisingly this also comes with the power of men to make decisions for the women in the family. Marriage choices, education, permission to work and every other life-changing decision are all taken by men in a society that is essentially run by the males of the country.

While there is no evidence of prenatal sex selection in Pakistan, relatively poor treatment of girls is widespread, with denial of food and health care – a phenomenon that is known as “extended infanticide”. After ill treatment at an early age, the story gets even worse with advancing years as fathers and brothers select the girl’s future husband, set the conditions and harass and stigmatize her should she want a divorce. The issue of inheritance has the same issues with Islamic Shariah law giving a daughter only half of the entitlement of  a son; and even that paltry amount is mostly either settled in the girl’s dowry or just given up in favor of her brothers.

This biased family situation is further complicated by the hazards of public spaces for women; reports of sexual harassment at work places, limited choice of employment (in rural areas, 64% of population still considers that either catering for livestock or teaching or medicine are the only jobs suitable for women) complicated legal support that makes it almost impossible for many Pakistani women to go out and be self-supporting without being socially stigmatized.

Yet we should remember that not all women in Pakistani society face all of these problems. The urban elite classes mostly support their women in terms of foreign education, employment and the right to select their own husbands. But even women from privileged sections of society still have to face one or the other of such problems during their lives. Even so, the situation is much blacker in  rural areas and for women of lower income classes , where social mobility is almost none existent and women find it next to impossible to make any sort of decision for themselves.

Among all this chaos, Dr. Rakhshanda Parveen – founding director of the Creative Anger by Rakhshi  social enterprise has come forward with a dream and hope for unprivileged, disadvantaged groups of women. Her solution is specifically for divorced, disabled, and unmarried women (over the age of 40) to gain some form of economic empowerment with government support. Parveen is not advocating income support for women, what she is actually advocating is tax relief for these women to help them become a part of economic life and support themselves and their children.

On a local level, divorced and unmarried women are viewed with derision and considered to be a burden on family. If a woman has taken the decision not to marry by herself – in a land where most poor women don’t get married because of wedding expenses and dowry expectations – the humiliation becomes intense.

Between October 2009 and March 2010, Sinfsurat – a joint project of Creative Anger of Rakhshi, the Friedrich Naumann Foundation for Freedom, and the Economic Freedom Network Pakistan (EFN) – undertook a qualitative exploratory study with the aim of providing sustainable economic solutions to certain special groups of Pakistani women impacted by poverty and lack of employment and business resources. It proposed that a tax-break would help these women find freedom from stigmatization and servitude and aid them gain self-esteem through self-employment.

However, while developed countries have already extensively debated the issue of gender-based taxation, Pakistan has yet to gain a broad agreement on this issue between economists, bureaucrats and policymakers. With a taxation system that disadvantages the poor already in place, the debate on gender-based taxation has yet to grab the attention of tax experts in the country. Furthermore, another  key challenge is how to translate economic empowerment into policy action and introduce  gender sensitivity into mainstream politics, policymaking, finance and business.