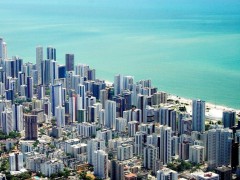 Are you hungry? Mix a glass of water with a tablespoon of sugar and drink it. Then, eat nothing and do it again tomorrow. And the next day. If you have kids, offer the same to them.

If you do it so, there you have it: you had a tiny experience of what millions of people around the world have. In Brazil, this “mix” is called garapa. José Padilha, one of the most famous directors in the country, made a documentary in 2009 about hunger from the perspective of three families who know nothing but lack of food. I urge you to watch the trailer for this film, “Garapa,” (in Portuguese) and an interview in English with the director.

One of the most touching moments of the documentary for me is when a guy in his late twenties says: “I have never had three meals a day.” That means that he never felt fulfilled: the hunger is a constant feeling for him.

For many families in Brazil, government aid is the thing standing between them and that kind of hunger. It is not just complementary: It is the main source of help, the thing that provides food and the game-changer for them. In order to receive such types of financial aid, you have to prove you’re poor and, if you have kids, that they are at school.

No poverty at first sight. Recife from the air by guilherme jofili, flickr, CC BY 2.0

People who are against government aid say this approach is a fallacy and fraud. They argue that those who receive the money are just lazy and they have more kids just to receive more money.

Every time I hear arguments like these I remember that guy who does not know what a “full belly” is, and I just want to punch the person who says he is lazy in the face. However, since I cannot do that (right??), I try to argue and show examples. Usually, I can make the people rethink what they consider as “lazy”. Or they just shut up about it.

The thing is: those types of financial help were key to Brazilian economic growth. Many families that used to have to resort to drinking garapa now can afford the rice and beans they need. And many other millions of people now can buy products they couldn’t before. Access to credit has spread through the country, and a new wave of consumption has begun.

Since numbers are always great arguments, the Bertelsmann Transformation Index has some enlightment:

“During the Lula administration, poverty reduction and income distribution indicators have markedly improved. The overall poverty rate fell from 34% of the population in 1995 to 12.7% in 2007. About 5.2% of the population still lives on less than $1.25 per day. But millions of Brazilians have moved out of poverty in recent years.”

The interesting thing is that this growth has happened in perhaps unexpected places. The Brazilian journalist Vinicius Torres Freire wrote a great article for the Folha de Sao Paulo newspaper about the improvements that Brazil has gained and how many people don’t see them. Most of the signs of economic growth can be seen away from the already rich cities; according to the Estadão newspaper, “the northeast is emerging on the national scene for its rapid economic progress, well above the average for other regions.”

This growth is much more visible far away from Rio or São Paulo. And to understand that, the “center” of the country—these large cities—has to better get to know the rest of the country. As Freire pointed out, “we, the people from ‘here,’ need to visit more of Brazil”.