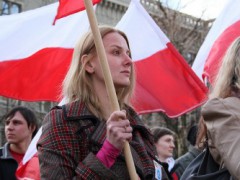 One of a growing number of women in Poland who are proud of their country and ready to move forward equally amongst men. Photo by Pascal Maramis, on Flickr, CC BY 2.0.

The European Commission and Poland have made it clear that in order to initiate and sustain inclusive economic growth we need to increase the number of women in employment. Within the framework of the EU’s 2020 growth strategy for the coming decade, which is built on shrewd, sustainable and inclusive economic priorities, the European Commission has issued seven country specific recommendations (CSRs) for Poland to aid in improving its economic performance. Of these seven, raising the employment levels of women seems most interesting to me.

The number of registered unemployed people in Poland has reached 13%. The EU average is 12% while Poland’s wealthier neighbor Germany weighs in at 5%. Over 52% of the unemployed in Poland are women. In terms of leadership positions, in January 2012 woman occupied an average of 14 % of executive board positions in the largest companies in the European Union. Poland’s score was 12 % with 74 % of Polish companies having at least one woman on their board. (1) While this can in part be attributed to a lack of affordable childcare and maternity leave, for the full picture you also need an understanding of current perceptions of women in Poland.

Poland is a country that is 96% Roman Catholic, very traditional, conservative and predominately patriarchal. A large part of Polish society still seems to believe that a women’s place is in the kitchen – a reactionary stance usually sweetened by attempts at humor – just look at what great food we have! There’s no disputing that deeply conservative values are very much  alive and kicking in Poland. Take Lech Walesa, for instance, one of Poland’s most prominent public figures, and the rabid unapologetic anti-gay remarks he made earlier this year. Or Poland’s first openly gay MP, Robert Biedron, who was attacked  following the Gay Pride demo  in Warsaw. Most Poles would agree that the far right is on the rise in the country, yet the government does very little. The two biggest political parties in the country, Civic Platform and the PiS, are both on the right of the political spectrum, both oppose gay rights and are equally hostile to abortion.

The EU is aware of this problem and hopefully the following top-down initiatives it has started will provide unshakable new foundations for equal treatment, not just for gays but women as well.

To kick off, we have the the “Toddler” Programme which the Polish Government (Sejm) introduced last year. Around 20 million Euros were allocated to create approximately 3,200 child daycare centers, and maintain and overhaul existing ones.

The 2020 Framework will build on this. This year, the Employer Action Code Act was adopted, which more than doubles the length of parental leave benefits which are now provided for a 6 month period. Unfortunately, the actual monthly allowance will not be increased, and applying for it still involves jumping through too many hoops in Polish bureaucracy. On the bright side, though, new public awareness campaigns aim to encourage fathers to take up responsibility for child rearing and care. Besides which, Poland is trying to bring about a new climate of equality with programs promoting gender diversity on company boards and awareness campaigns to facilitate women’s entry to business.

The Polish government and the EU Commission have also stressed the importance of education and the need to enforce gender equality not only in the labour market but in the home as well. This is being done by re-evaluating pre-school education and making the needed changes. Likewise, there are discussions on establishing a National Training Fund which would serve as an apparatus for financing lifelong learning for employees.

All these changes are meant to create the conditions that favour woman’s participation in the labour market. Polish women today face outdated perceptions of women’s roles and disproportionate levels of unemployment and exclusion from the labour force. According to The Network of East-West Women, an international network dealing with the status of women in Central and Eastern Europe, the status of women in Poland is in a state of permanent crisis. Will these new measures bring about equality or will the state of crisis be prolonged?

I believe that if you increase the numbers of female workers, you will also increase the amount of human capital. Women have a duality which men seem to lack; they are delicate and sensitive, filled with awareness of themselves and others while at the same time they are resolute and determined, with a strong focus on what they want to achieve. Such a duality is needed in our ever changing globalized capitalist world where it would greatly enrich the male dominated workforce.

1. Women in Economic Decision-making in the EU: Progress Report, 2012