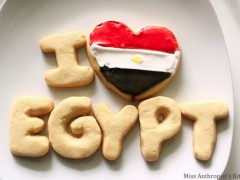 Possibilities in a new Egypt after the crisis. Credit: Miss Anthropist’s Kitchen.

There has always been global interest in the development process undergone by developing countries to achieve higher growth rates. This focus is primarily on outcomes and tends to ignore the actual repercussions of certain development activities on societies and local economies.

It is not uncommon that developing countries experiencing rapid growth find that inequality also increases. The GINI coefficient gives a window into this reality as it measures income equality within states.

Despite impressive economic growth in recent years, Egypt now faces many challenges in maintaining sustainable growth and addressing economic, social and regional inequalities.The last available GINI coefficient for Egypt is for 2008 where it is measured at 30.8. Although this figure places Egypt in the same category as countries such as Morocco, Canada and Spain, the situation has considerably worsened since then. The political turmoil gripping Egypt since 2011 has adversely affected the already fragile and highly monopolized Egyptian economy.

The worst of these effects were felt by already disadvantaged sectors of society. According to the World Bank, 25% of the Egyptian population falls below the national poverty line, further illustrating how shocks to the economy are hurting the poorest members of Egyptian society.

Combined with recent political strife, the gap exasperates many of the existing social ills. Omar Kandil, Public Policy Graduate Student at the American University in Cairo currently at Columbia’s School of International and Public Affairs comments:

“The widening income gap fans the ongoing stigma within Egyptian society. Income inequality, arguably one of the triggers of the Egyptian and Arab uprisings, represent the lack of opportunity and mechanisms provided to the underprivileged”.

In light of the statement, it is obvious how income inequality may have negative effects on aspects that are not necessarily limited to the realm of economics. This aspect of the problem illustrates the mounting need for  future development plans to include measures that ensure that efforts will be made towards equalizing the benefits of economic growth and development.

Currently, Egypt has a unique opportunity to adjust policy to reflect the importance of inclusive growth. The Egyptian constitution is going through a period of amendment at the hand of 50 experts and public figures. Articles 8 through to 38 in the proposed constitution offer a relatively progressive framework for social and economic inclusion and transitional justice that was absent in previous versions of the document. Kandil reiterates,

“It is the duty of the government and policymakers to tackle the issue of income inequality through fair mechanisms and policies, in order to ensure the well-being and welfare of an Egyptian society stymied by lack of economic opportunity”.

The way forward for Egypt has enormous potential in terms of tackling inequality head on, an opportunity that many developing countries seldom get when the benefits of growth are flooding into the hands of the elite few.