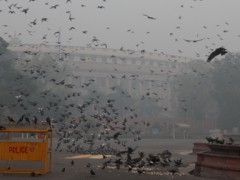 One of the most-touted phrases across the globe – India, the biggest democracy in the world – is also one that is fast losing its shimmer. Though all Indians enjoy the right to political equity, the other rights which include socio and economic equity are still a far cry. So is the right to earn a living and the right to life.

That life is cheap and living expensive was amply demonstrated last month when tens of thousands of Indians fled for their lives from South India to the North-East, and many others lost their lives in bouts of  mindless violence.

The world’s biggest democracy still does not take care of its people and seems to be more interested in lending an eager ear to foreign fatcat investors. But the events of the last couple of months –  that included ethnic riots, communal violence, attacks on the media, wanton destruction of property and racial hatred – were not confined to a single outburst or protest. They underlined the fragility of the nation and left people wondering if the democratically elected government is indeed working for the common good or merely pandering to its own interests.

One of India’s largest states, Uttar Pradesh, which is inexplicably one of the most backward regions of India despite its proximity to the national capital Delhi, witnessed some serious rioting last week. Someone, who is still untraced, found the torn pages of the holy Quran in a place called Masuri after which protesters attacked a police station, damaged public property and set fire to dozens of vehicles. The police retaliated and six people died of gunshot wounds.

A week later, three young boys drove a milk truck into a police camp, killing three policemen. The police see this as a conspiracy.

An uneasy calm descended on the area as people fled their homes fearing retaliation. The police investigation into the “pre-planned violence” is shoddy and hides more than its reveals. This was the seventh communal riot in just six months in one of India’s largest and poorest states.

Just a few weeks earlier, India’s financial powerhouse Mumbai was rocked by rioting when locals gathered to protest discrimination against Muslims in Myanmar and riots in India’s North-East. Though permission had been sought for a prayer meeting and a peaceful protest, the demonstrators went on the rampage attacking journalists, setting broadcasting vans on fire, assaulting policewomen and damaging public property. They even vandalized the memorial to India’s First War of Independence of 1857 which sent shockwaves across the country.

A helpless government opened shelters and refugee camps for the displaced and the homeless. It took weeks of repeated assurance and reassurance from ministers and senior politicians to persuade the fleeing people to come back.

Land and migration issues had two communities at each other’s throats. The Bodo tribals and the Muslim settlers (immigrants from Bangladesh) in India’s north-east state of Assam went about burning wood-and-thatch houses, shooting and hacking each other to death in sporadic clashes that spread to large swathes of the population as the government sat by and fiddled. The riots were about the vexed issue of land control which Bodo tribals feel has been slipping away to the Muslim settlers from Bangladesh.

Indian Prime Minister Manmohan Singh visited the riot-torn areas, went through the familiar motions about living in peace and harmony, providing compensation and bringing the situation under control. Yet still the killings continued. The final death toll was close to a hundred, with around 4,00,000 displaced, nearly 500 villages completely gutted and displaced people living in over 250 refugee camps.

A Failure of Democracy?

Over the last three months, violence has repeatedly shaken India – in North-East India, parts of South India and finally North India. What does it all show? It shows that anyone at their whim and fancy can start a riot.

If a nation, or large parts of a nation, can be brought to a standstill, simple acts like dropping a folded piece of paper into a ballot box or punching the buttons on an electronic voting machine are unable to justify the tag of the ‘biggest democracy’.

Along with political equity, the more than one-billion-plus Indians also need social equity, economic opportunity and security to life. After all, when this massive population cast its votes, they are also aspiring to peace, progress, security and harmony. Not violence, riots, threats, assaults and police gun rampages.

Our ministers, and the Prime Minister too, have been heard talking about inclusive growth, growth that has something for everyone. But for that to happen, Indian politicians have to grow up, become leaders and do what is expected of them – walk the walk and not just talk the talk.