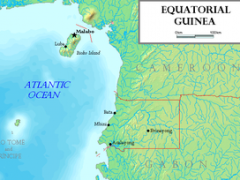 Indigenous peoples and resource exploitation. Who wins, who loses, how is the game played, how should it be played?

When one lands in Malabo, Equatorial Guinea, it is immediately apparent how resource-rich this country is. The silk cotton trees greeted us with their verdant lushness and the patchwork terrain of high rises and densely-populated residential areas occupied my thoughts as the plane completed its descent.

It’s easy to get caught up in the potential, the unrealized dream of equitable development, but we cannot. Yes, it is true that Equatorial Guinea’s GDP has increased from about 1 million USD in 1968 to 14 billion USD in 2010 (World Bank, 2012). But where does this wealth come from? Equatorial Guinea is heavily dependent on oil. According to the African Economic Outlook report, 78 percent of the nation’s GDP is derived from the exploitation of its oil reserves. The fact remains that Equatorial Guinea has the highest GDP per capita on the continent (about 19,300 USD in 2011, a near 2100% increase from 940 USD in 1998).

However, Equatorial Guinea’s population of just under 700,000 has yet to partake in this wealth. This disparity is seen in terms of healthcare. The population makeup, in terms of age, looks like a bell curve – as “Equatoguineans” aged 0-5 and 65 and up are a small percentage of the population. The United Nations (UN) estimates that about 20 percent of Equatoguinean children die before reaching age 5.

The reasons for this include high infant mortality, relatively short life expectancies and all of these are underpinned by developmental issues such as access to healthcare and food security. While Equatoguinean state officials boasted investments in health, pointing to La Paz hospital in the government complex of Sipopo, life expectancies and population makeup in terms of age tells a different story. That investment has not necessarily translated to access.

The contrast between President Teodoro Obiang Nguema Mbasogo and his appointees’ (including his son’s) lives and the lives of Equatoguineans in rural and urban centers cannot be ignored. The state-run channel plays footage of the President speaking at African Union meetings in his role as President of the AU, alternating between footage of state officials speaking in conference halls. Pictures of President Obiang grace the halls of hotels, conference halls and government buildings, almost exhorting us to accept the representations over what we see with our own discerning eyes.

Resource exploitation in post-colonial states means the disruption of pre-existing land claims in indigenous communities. It also means the influx and flight of capital, as the economy retains the complimentary, export-based orientation of its colonial days. Furthermore, the effects of the “resource curse” rests more heavily upon the people than it does on the government.

Section XX of Equatorial Guinea’s 2006 Hydrocarbons Law, requires local content utilization of 35 percent. This means that, in the manufacturing of goods, corporations must use local goods. In spite of this, the oil sector, which accounts for 78 percent of the nation’s GDP, only employs 4 percent of the nation’s workers, while projections show that from 2010 to 2020, between 25 000 and 49 000 young Equatoguineans will enter the labour market each year.

What does this mean when sectors outside of oil are very small? Can indigenous people win the ‘game’ of resource exploitation?