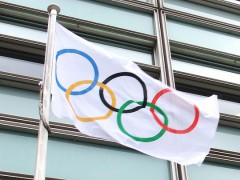 “Do the Olympics highlight “free and fair” competition, or is it just one more scene in which the developing world’s disadvantages are starkly visible?”

This is the question that was on my mind when I watched the Olympic Procession on July 28. Olympiads clad in colorful regalia pranced and strutted beneath their nations’ respective flags. However, there was one group that stood out: the three independent athletes competing under the Olympic flag. At the time, I did not notice the absence of South Sudanese athlete Guor Marial, who could not be in London at the time because of complications due to his lack of a passport.

When I learned of this, it struck me that this is a real disadvantage. Possession of a nationality, a passport and ability to traverse trans-national and international borders are taken for granted by most athletes competing in the Olympics, yet it is a serious consideration for stateless athletes.

The fourth of the 5 “Fundamental Principles of Olympism” (within the International Olympic Committee’s (IOC) Charter) states that:

“The practice of sport is a human right. Every individual must have the possibility of practicing sport, without discrimination of any kind and in the Olympic spirit, which requires mutual understanding with a spirit of friendship, solidarity and fair play.”

What, then, does this mean for stateless athletes?

South Sudanese marathon runner Guor Marial will be one of 4 independent athletes competing in the Olympics this year. The remaining three, Philippine van Aanholt, Reginald de Windt, and Lee-Marvin Bonevacia, hail from Curaçao, of the former Netherlands Antilles, dissolved in October 2010. (Eight months following its dissolution, during the June 2011 International Olympic Committee (IOC) Executive Committee session, the Netherlands Antilles’ membership on the Committee was withdrawn.)

Competing as an independent athlete means rather than competing under their nation’s flag, they do so under the Olympic flag. Independent athletes fall under three categories that overlap: those who are stateless, those whose nations do not have Olympic Committees, and those who hail from occupied or colonized states. In Guor Marial’s case, it is a combination of the first two, as South Sudan has hundreds of thousands of stateless inhabitants, and does not have an established Olympics Committee.

This is due, in part, to the August 2011 Sudan Nationality Act passed by the Khartoum government, which declares that Sudanese may have dual citizenship with any state but South Sudan. This is especially salient for youth whose parents are both Sudanese and South Sudanese, as their nationality is based upon the nationality of the parent who holds legal custody.

Guor Marial’s story is one of the complicated ones. Born April 15, 1984 in Panrieng, in what is now South Sudan, he is a survivor of child slavery in Sudan during the Sudanese Civil War, and a former refugee. He came to the U.S. as a refugee from the protracted 39-year Civil War that claimed the lives of eight of his ten siblings, becoming a  permanent resident; however, because he is not a U.S. citizen, nor is he a Sudanese or South Sudanese citizen, he does not have a passport. As such, he cannot compete for Sudan, South Sudan (which does not yet have an established Olympics Committee), or the United States, in spite of qualifying to compete. Thus, Marial is competing as an independent athlete, and the first stateless Olympiad. In a recent interview with Joshua Kors of Huffington Post, Guor Marial is quoted as saying:

“If I ran for Sudan, I would be betraying my people.. I would be dishonoring the two million people who died for our freedom.”

In a way, the independent athletes represent the nexus of statehood, belonging and citizenship. Guor Marial is hardly an anomaly. In spite of the United Nations’ (UN) Universal Declaration of Human Rights, which states that everyone has a right to a nationality,conservative estimates place the number of stateless people around the world at 12 million people.

Statelessness affects individuals’ access to rights and privileges usually accorded by the state- including, but not limited to secure land tenure and water rights (which tie into rural dwellers’ ability to participate in local markets and bolster regional food security) and the ability to travel across transnational and international borders freely (this particularly affects refugees).