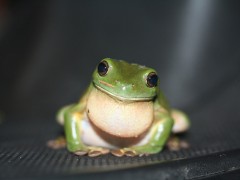 “It’s not that easy being green.” America’s favorite frog first made this profound statement in 1970, right as the green movement got its first legs. Although Kermit may have recanted somewhat for a recent Ford Escape Hybrid commercial (some say sold out), the wisdom behind his oft-repeated observation still remains true today. Living a green lifestyle is not that easy. In fact it can be quite expensive—a luxury difficult for many but the richest individuals, companies, and countries to afford.

Luxuries, by definition, are items that are much more easily available to those with expanded means. The rich can obviously afford more luxuries than the poor. Such a statement is so evident it would be almost silly were it not for the fact that far too many people fail to acknowledge that environmentalism is indeed a luxury. A green lifestyle is only possible when individuals, companies, and countries can afford it. In other words, to be green, one needs to be (relatively) well-off.

It’s not that easy being green / CC Stephen Michael Barnett

Accordingly, economic growth is necessary to provide the extra income to afford greener practices. While higher incomes do not ensure a more sustainable lifestyle—since there are whole galaxies of luxuries for the rich to spend their money on—economic growth is the cornerstone upon which environmentalism must rest. Emerging economies, like China and India, and poor individuals struggling to make ends meet will never be able to afford a green lifestyle unless they are first able to pay for their basic needs.

In the US, for instance, a 2013 Ford Fusion SE (a mid-sized family sedan) has a base price of $23,800. The comparable hybrid edition starts at $27,200—over a 14% increase in price. At a large grocer in Princeton, NJ (a suburb of New York City) a dozen store-brand eggs cost $1.79. At $3.79,  comparable organic eggs are 112% more expensive. Likewise, the cost of constructing green buildings according to LEED standards (a construction certification system) is $7.50 to $12.50 extra per square foot, an increase of 3%-8% of total construction costs. According to a recent study, the annual economic cost of environmental regulations on manufacturing plants was US$21bn over a recent 20 year period. This does not include direct costs of nearly US$8.5bn to the federal government in 2012 for running its chief environmental regulator, the Environmental Protection Agency (EPA).

There are myriads of similar examples which show that in most facets of life choosing a green lifestyle can be significantly more expensive for both individuals and firms than the non-green alternative. And while some argue that higher initial costs for green products are often recouped by lower usage costs—hybrid cars save drivers money on fuel and LEED-certified buildings can be cheaper to run—having the flexibility to plunk down extra capital at the outset is itself a luxury, particularly for those with restricted access to credit.

On the national level, the luxury of environmentalism is equally evident. The greenest countries—those that have implemented environmentally-friendly policies—tend also to have the highest incomes.  According to Yale’s Environmental Performance Index (EPI), eight of the top ten ranked countries in 2012 (the EPI refers to them as the “strongest performers”) are in the OECD. These eight countries were between the third (Luxembourg) and twenty-ninth (Italy) richest countries that year, as measured by the Economist Intelligence Unit’s calculations of GDP per capita[1]. The two exceptions, Latvia and Costa Rica, were still fairly rich, ranking 52nd and 77th respectively.

In contrast, the bottom twelve (the “weakest performers”) in the EPI were relatively poor with a mean rank of 103rd, as measured by GDP per capita.  This list includes India, one of the largest countries by population and one of the biggest polluters. In fact, the average GDP per capita for the weakest performers was $8,413.48 in 2012[2], while that of the strongest performers was $53,606.85. If environmentalism was not a luxury, such a strong relationship between a country’s income and environmental performance would be unlikely to exist.

The reality that environmentalism is a luxury is a stubborn little fact that sticks in the craw of many in the green movement who see growth and economic development as a detriment to the environment rather than its savior. However, understanding environmentalism through this perspective is important because it will help green activists and policymakers understand the movement’s limitations and the ways to forward their agenda.

Understandably, both emerging economies and newly-minted middle classes may be reluctant to spend their recently acquired riches on the particular luxury of environmentalism. They may, for instance, prefer to reinvest their earnings for faster growth or to consume other luxury goods. This is reasonable, given the fact that those who preceded them both had a choice of how to spend their surplus incomes and currently possess lifestyles that the new risers desire to emulate.

By understanding both that environmentalism is a luxury and that individuals and countries have a wide array of preferences, the green movement will be better situated to vouch for policies and lifestyles that they value. Economic growth thus is no longer the enemy of environmentalism, but the means by which individuals and countries will gain the resources to implement greener lifestyles. If individuals and countries have more income, they will have more options and thus will be more open to spending some of their surplus money on being green. All that will then be needed is a little persuasion that being green is the right luxury to spend your money on. It won’t be easy, but greater minds, like Kermit, have been telling us that for decades.

[1] The author of this post works for the Economist Intelligence Unit. The views expressed here are his own.

[2] This figure is actually considerably inflated by the presence of oil-rich Kuwait, which is ranked 126th (out of 132) in the EPI, but had a very high GDP per capita of $46,580. If Kuwait is excluded from this calculation the weakest performers would have had an average GDP per capita of $4,943.79 in 2012.