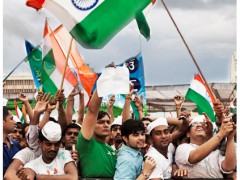 Sixty nine years since independence and India is still battling a parasite called corruption. When the people of India voted for democracy, little did they know that six decades on they would be wrapped in a emotional tug of war with the state and the government. Today, India stands at a watershed in its history, when her citizens seem to have suddenly awakened from a deep slumber to fight for their right to live in a state free from unfair practices and corruption.

The Anna Hazare Anti-Corruption movement in Delhi
Photo by the author (CC BY-NC-SA 3.0)

Where and how did it all start? It started with a hunger strike by a frail man in his mid 70’s, a man with a will of iron and the smile of a child. It started with Anna Hazare and his Jan Lokpal Bill. So what is the Jan Lokpal Bill? In short, it’s an anti-corruption citizens Ombudsman bill. According to Anna Hazare, “The Jan Lokpal Bill is an act to create effective anti-corruption and grievance redressal systems at the Centre so that an effective deterrent is created for corruption that also provides effective protection to whistleblowers.” This resonates in every manner given the rising discomfort and dissatisfaction of the people of India with the practices of the state and the country.

The Jan Lokpal Bill was drafted by N. Santosh Hegde, a former justice of the Supreme Court of India along with Arvind Kejriwal, a social activist and Prashant Bhushan, a senior lawyer in the Supreme Court. The draft of the Jan Lokpal bill, unlike the government’s 2010 draft of the Lokpal Bill, incorporated stringent provisions and gave much more authority to the Lokpal (Ombudsman) including the power of placing “the Prime Minister of India within the ambit of the proposed lokpal’s powers” .

The differences between what was demanded by the people and Team Anna  and what the state actually was prepared to put in the bill are shown in the table below:

Demands of the Citizens and Team Anna and what the State was prepared to grant in the Jan Lokpal Bill.
Image Courtesy: Times of India Newspaper. (CC BY-NC-SA 3.0)

The Jan Lokpal bill focuses primarily on all acts of corruption including gross or willful negligence, reckless decision-making; excessive exercise of discretion, blatant violation of systems and procedures, and victimization of whistleblowers. The Jan Lokpal bill was presented to the state and the need of the hour was to ensure that it was passed in both houses of Parliament. That brings us to the question – what is the status of the bill? Has it been passed?

On 27 August 2011, a special session was held in Parliament and after much deliberation, a resolution was passed unanimously in both houses – Lok Sabha and Rajya Sabha. The resolution was to forward the bill to a standing committee so that a structure could be created and a report could be finalized. In India everything seems to move at a snail’s pace but turn that into a procrastinating snail’s pace and the final result is a Lokpal Bill that seems to be the by-product of every politician’s convenience.

On December 27, 2011, the lower house of Indian parliament, the Lok Sabha passed a controversial Lokpal Bill under the title of “Lokpal and Lokayukta Bill 2011.” On behalf of the people of India, Team Anna responded saying that the Government Lokpal Bill was not what their Jan Lokpal bill had proposed. The inevitable result then is  – back once more to the drawing board!

The latest news is that Anna Hazare, the man who started this fight against corruption, is ready for the next battle. He has announced  a 18-month tour of India to campaign for the original Jan Lokpal Bill. The first step in creating this movement was launching an apolitical outfit called Janatantra Morcha at the historic Gandhi Maidan in Patna on January 30, 2013. The primary aim of Janatantra Morcha is to work for change in the system.

As rightly said by Anna Hazare, this is the ‘Azadi ki dusri ladai’ (the second freedom struggle) but there are miles to go before any concrete resolution can be arrived at. That leaves me and many others like me too with one lingering thought in our minds – “Will my dream of living in a corruption free India ever come true?”