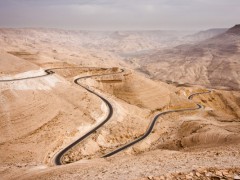 The problem of water scarcity puts an undeniable blight on the lives of millions of people, including in Jordan which has been ranked tenth out of the seventeen states in “extreme risk” by Maplecroft’s Water Stress Index. The challenges of water scarcity may seem remote to visitors to the rich areas of West Amman and international tourist sites such as Petra and the Dead Sea, but they are real enough for ordinary residents, particularly those living outside the capital. Agricultural production, a key economic activity, is increasingly expensive and difficult as the costs of water rise. And the future lack of water poses a threat to the growing population of this small kingdom.

The words of Steve Watson in Liquid Asset evidence a certain hope when he says, “all around the world simple, effective systems can be put in place to change the way that water is accessed.” Yes indeed – if only people didn’t get in the way!

There is much to achieve before this vision can be realized in Jordan and the wider region of the Middle East and North Africa (MENA).

The water shortage has not just been caused by climate change: forced migration, conflict and bad governance have exacerbated the crisis and prevented application of easy solutions. Jordan is a case study of how these manmade issues impact on the problem of water scarcity.

More people means more strain on existing water supplies. Jordan’s population, currently at standing at six and a half million, is on the rise. Declining infant mortality rates, greater wealth and the trend to have more children are all contributing to an average annual population increase of +0.984%. Furthermore, the population is becoming increasingly concentrated in urban areas, with an annual rate of urbanisation of 1.6%.

Adding to the natural demographic burden on Jordan’s precious resources are the human-made factors of immigration and conflict. Since its independence in 1946, Jordan has participated in, or been neighbour to, many conflicts – the 1948 Arab-Israeli War, the 1967 Six Day War, the 1973 Yom Kippur War, and most recently along its borders the Iraq Wars and continuing Arab-Israeli conflicts. The effect has been to create an enormous Palestinian sector within Jordan, estimated to be over half the total population, straining not only the resources but the tolerance of Jordanians themselves. There has also been an influx of Iraqi refugees since 2003 while the escalating crisis in Syria is causing a further influx of displaced persons, causing even more strain on already over-stretched public ultities such as water.

The instability of its region has further affected Jordan’s natural water supplies. The Jordan River, once a major source of water for the kingdom, was diverted after animosity grew between its stakeholders. The dams built by Syria, Israel and Jordan have caused the river to lose 95% of its original flow. This has also been the fate of Jordan’s other significant waterway, the Yarmouk River, which is now reduced to a mere muddy trickle.

In 2009 the chairman of Friends Of The Earth Middle East, Munquth Meyhar, said, “The conflict made every country do their best to grab as much as they can, and non-cooperation between them is what really affected the area.” It is an oft-repeated adage that the wars of the future will be fought over water – but this is already sad reality in the MENA region.

With the imperfect hand of cards already dealt to Jordan, the problem of governance is unsurprisingly critical in securing the future of its natural resources.

Local governance is a crippling problem for Jordan’s water projects. The Disi Water Conveyance Project, which aims to carry water from underground resources shared with Saudi Arabi to the capital Amman, has seen constant interruptions to its construction due to local disputes. Typically for such incidents, contracts are handed to a certain tribe or businessman for transport or logistics, causing a rival tribe to attack the site and shut down work. It is clearly far from the dream of Watson’s notion that, “Researchers have found… that by working with local communities, it can be possible to demonstrate the undeniable benefits of decentralized water treatment.” First and foremost it is necessary to stop them shooting at one another!

Adding to the woes of the Disi project, reports have indicated a high level of radioactivity in the water. While some water sources around the world do contain high levels of radiation, dealing with this problem is expensive and, in the context of Jordan, it has been estimated that the cost of doing so will rise to 10% of the average earnings of an Amman resident. Indeed, recent cost increases have occasioned protests – a sign of things to come.

The fundamental problem highlighted by the examples given above is the weakness of state institutions such as the police, the criminal justice system and even the ministries. There is little ‘joined-up government’ between self-interested parties such as the Ministry of Planning and International Cooperation (which doles out international aid), the Ministry of Water and Irrigation and the leaders of individual projects.

Real leadership comes from Jordan’s political elite headed by King Abdullah II, who has proven himself adept at appealing to aid-giving states such as the US while maintaining authority with his own people – although the Arab Spring is testing this assumption rather vigorously. Tribal violence is increasing as frustration at the lack of progress in resolving the Arab-Israeli conflict needles the tensions at the heart of Jordan’s heterogeneous society. Can one man guide a factious population through the numerous perils of the energy crisis and regional instability?

It is difficult to see any way in which simply working with local communities and bringing in technology can solve the intractable resource challenges of poor countries in the MENA region. Jordan suffers acutely from demographic, migration and political issues – all of which mean that solutions must reach far beyond working with local people and giving aid for water projects.

The key public goods that must be bolstered are those of security and accountability. Security will guarantee Jordan’s borders and, through stability, encourage the economic and societal developments that are essential in establishing major infrastructure projects such as those required to relieve the country’s water scarcity. Accountability must be established to scrutinise the work of government and politicians so as to give their work sufficient legitimacy, making projects more efficient and better accepted by inhabitants who feel their positive effects.

The consequences for Jordan if the internal problems of bad governance continue are severe. Increasing water prices will cause widespread unrest and exacerbate the deep fissures at the heart of Jordanian society. There is little it can do to prevent the profound regional vicissitudes, but the government must work with aid organisations and donors, which in turn must link their aid at every stage to transparency and good governance.