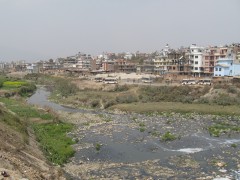 When the poet Bhanubhakta Acharya (1814-1868) visited Kathmandu, he was struck by its amazing beauty. In a poem, he lavished praise on the city:

“…The rich in this place are uncountable,
each person’s mind is filled with joy.
Kathmandu is an ocean of happiness,
this may be the golden city that the demons once built. …”

Unfortunately,the once clear and pristine rivers of Kathmandu valley are now choked with trash and industrial waste. This video by Pangeality Films shows a stream that has been turned into a free-for-all trash bin. 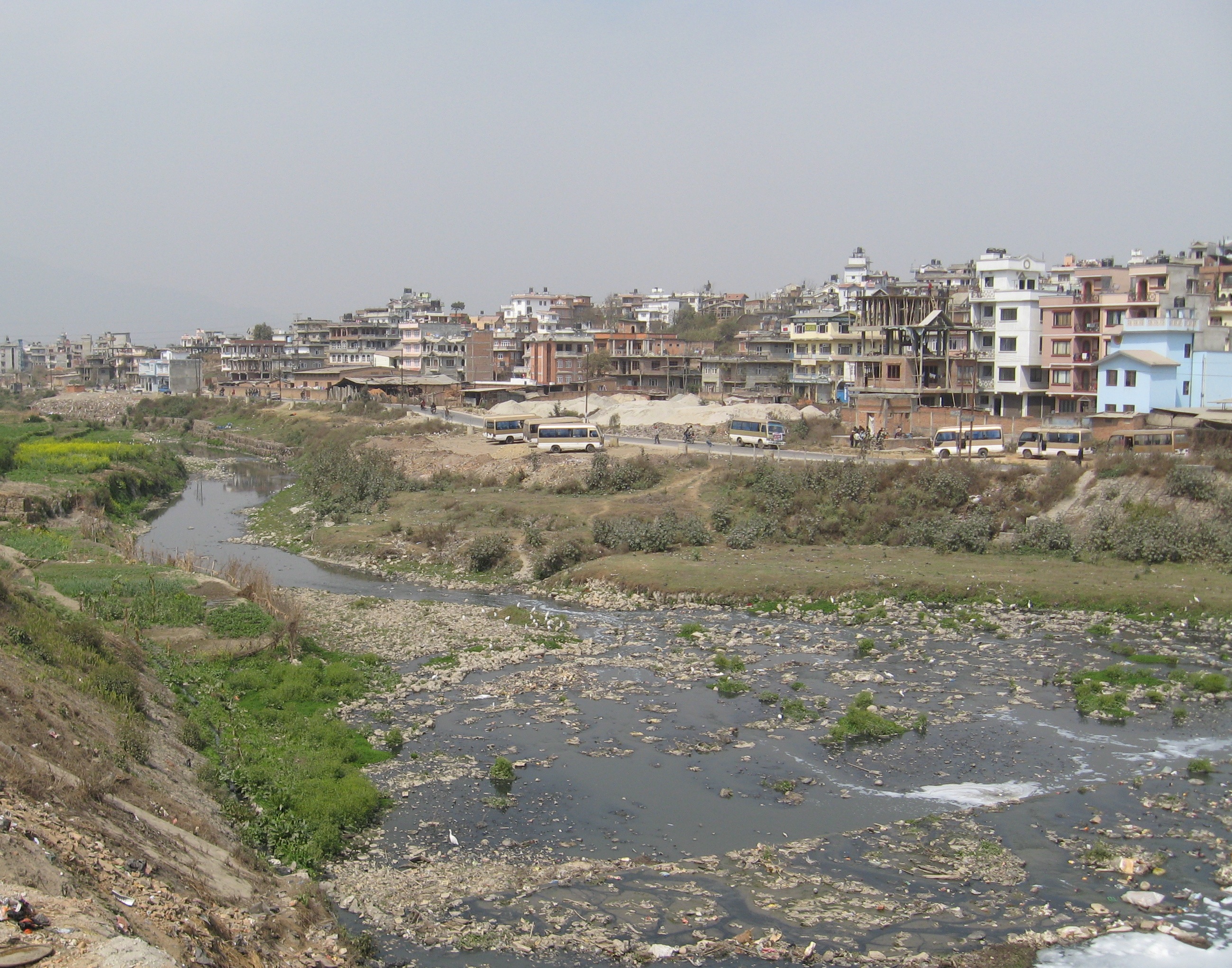 The Bagmati river system, Kathmandu’s main water source with deep cultural and religious significance, has been turned into an open sewer. Pragati Shahi commented in the Kathmandu Post that the river’s water quality and biodiversity has been seriously damaged and pollution has now reached saturation point.

To meet demand, KUKL and residents are increasingly relying on groundwater. Unfortunately, at the rate in which groundwater is being extracted – which is far in excess of the actual replenishment rate – and given the lack of oversight, it won’t be long before this resource too is depleted.

As rivers and streams are turned into landfills, Kathmandu’s miserable waste management system has become a byeword for organized mismanagement. It is very often vilified by squabbling political groups. Nor are labor relations its forte as frequent strikes and protest actions affect the city’s trash collection.It is not uncommon to see heaps of refuse lying around uncollected in various parts of the city – with people forced to bear the stench and possible adverse health effects.

According to The Himalayan Times, the general strike last month was no exception: “More than 600 metric tonnes of waste is daily produced in the Kathmandu Valley of which the Kathmandu Metropolitan City(KMC) alone accounts for about 350 metric tonnes.

“We could not collect garbage from Dillibazaar, Baghbazar, Maitidevi and Old Baneshwore due to demonstrations as demonstrators  were burning tyres in those locations,” said Shanta Ram Pokhrel, chief of the KMC’s Environment Management Department.”

Unchecked urbanization with no efforts made to organize and manage the pressure of growth is pushing Kathmandu to its limit. Apart from its ecological heritage, its cultural and architectural heritage is also under attack.

As Deepak Adhikari has commented talking about Kathmandu’s urban sprawl: “The Valley covers an area of 900 square kilometres but is losing more than eight sq km of farmland a year, urban planner Dhakal said, warning that if the trend continues, there will be none left by 2037”.

Experts also cite that more than 50 percent of the Kathmandu Valley has been occupied by concrete buildings. And this sprawl has no culture. Kathmandu’s much celebrated and beloved Newa architecture and building style is being abandoned in a hurry, and almost all new constructions stand in a cultural void. 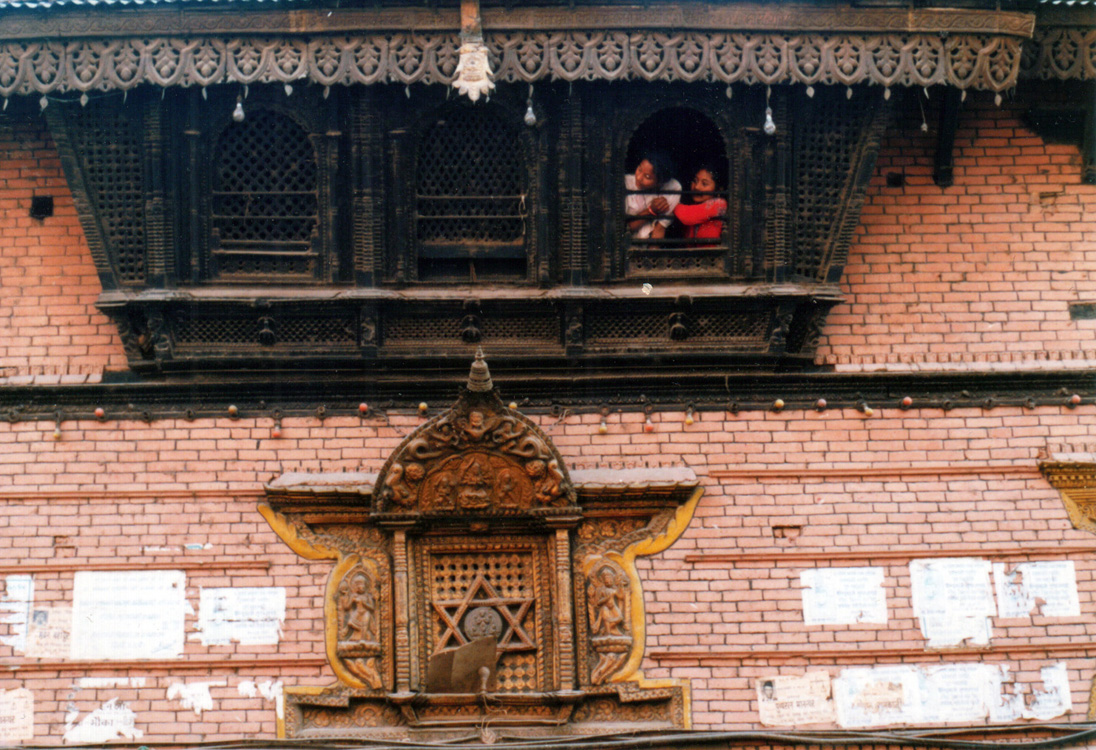 In an interview with Hindustan Times, German architectural historian and winner of the Fukuoka Arts and Culture Prize 2011, Niels Gutschow, said  that Kathmandu’s architectural heritage may soon be only a  memory. He went on to say, “Every year bahal courtyards with richly-carved doors are demolished, balconies and lintels removed, and cornices and roof struts pulled down to make way for new homes in the fast-expanding capital. Significant monuments, monasteries, temples and historic houses across the valley are being lost in their entirety. Until ten years ago a person did not even need a demolition permit, so you’d demolish your house, even in the so-called World Heritage Sites.”

The air stinks of garbage and the rivers are savagely abused. Water lines are running dry and the city lacks any sustainable public transport system. The once charming and inviting city of temples has lost its soul.

There are some people trying to reclaim the city: Bagmati lovers , architects fighting the lifeless concrete and public green space and advocates of sustainability. But in an environment of near constant turmoil and apathy, how far will their efforts take them in the city? And will they be enough?

Is the city just a bustling collection of high rises and concrete, gasping for fresh air and desperately looking for a drop of fresh water? Or is it a vibrant and hospitable soul whose heritage, ecology and culture has not been sacrificed for urbanization? Perhaps it is time for proud Kathmandu residents to ponder.