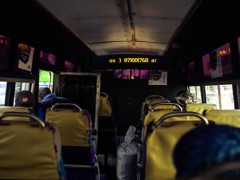 “The traffic situation in Nairobi has reached unbearable proportions that we need a stakeholders’ conference to chart out short, medium and long term strategies to deal with the situation as an emergency.” Former Kenyan Minister ICT Dr. Bitange Ndemo said recently in his article for the businessdailyafrica.com. Dr.Ndemo’s sentiment depicts how bad traffic gridlock can be in Nairobi, Kenya. According to a recent report by Nairobi county Transport and Urban De-congestion committee, the traffic congestion in Nairobi costs Kenyan economy an estimated Ksh.37 billion annually. The report noted that the Nairobi population increased from 350,000 in 1963 to 3.3 million 2014 with an estimated 300,000 vehicles without a corresponding increase of the road network.

When you look at the above, most people would see a problem. A problem that probably make the shun Nairobi but not Jeremy, FlashCast and his team. Jeremy and his partner Caine saw a business opportunity and decided to introduce a way to entertain, educate and inform the passengers stuck in traffic in public transport vehicles. Nairobi Public Service vehicles are identified by the route numbers, so if you were to use vehicles operating along Ngong Road for example, you would either use number 4 or 111. FlashCast operates a network of location-aware, dynamic text display installed in public transit vehicles. The company uses LED-marquee and LCD displays fitted inside the transit vehicles just behind the driver, where they are visible to all commuters. FlashCast engages the passengers by providing them with relevant local content such as the real time news, the traffic situation in different roads in Nairobi, weather forecast and different types of games. Passengers are also able to send messages through free interactive 2-way SMS, which forms part of the FlashCast content.

Three years ago, Jeremy Gordon and Caine Kamau met at one of Nairobi’s most famous innovation centers, iHub. At the time Caine was very much into hardware, and was known by many as the hardcore geek whilst Jeremy was thinking along the lines of helping small businesses communicate with markets. The two clicked and by August 2012, they deployed the first display in one of the buses operating on route 111 , Ngong Road. Fast forward to 2014 and FlashCast now has 20 full displays on four different routes within Nairobi. Impressive, considering how hard it is to run a hardware or combination of hardware and software start-up in Kenya.

The FlashCast team consists of the two founders Jeremy and Caine, the fleet manager and the sales team. The fleet manager inspects the gadgets and moderates the FlashCast content. The moderation part is important in ensuring that the team takes care of the public interest and diversity by not allowing irrelevant or indecent content.

The helping hand of Siemens Stiftung

Despite the fact that Kenya is hailed as the leading tech destination in Africa, it is not easy to run hardware start-ups due to a number of factors. Unfriendly taxes and high energy costs make it impossible for local manufacturing. For those who have ventured into hardware startup, they are usually forced to import most of the parts needed for their products. The other option is to assemble the parts in other countries and just bring already finished products to the market. FlashCast made a breakthrough when they were selected among the projects of the Siemens Stiftung empowering people. Network. On top of the publicity which comes with winning, the winners also get the chance to join the “empowering people. Network” program by the Siemens Foundation. Through the program the foundation is looking at promoting the technologies for basic needs. The idea is to make the promising solutions accessible and help in their successful implementation.

Carola Schwank, Head of empowering people.Network at Siemens Stiftung, outlined some of the benefits of joining the Network:

FlashCast, on their part, is hoping for a fruitful support based on the network Siemens Stiftung is trying to build in the region and in other places.

FlashCast’s idea is to engage the people while in transit but they see their role as being more than that. They provide channels for businesses and government agencies to communicate with the mass market. 50% of the FlashCast content is fun content including games while the remaining 50% is advertising content. According to Jeremy:

“We leverage this novel technology to offer businesses of all sizes an affordable, powerful, geotargeted channel to capture new business. We enable NGOs, government agencies, and social enterprises to broadcast vital information to a notoriously difficult to reach demographic.”

Digital advertising is still a relatively new concept in Kenya but it has seen significant growth in the last 2 years. Although the country has over 30 Million subscribers, the number of people with internet access is slightly over 21 million according to the stats by Communication Authority of Kenya (CA). The internet access number is key but even CA acknowledges the fact that most of those users are not active users and rarely go online. When they do, it is mostly to send or read emails. FlashCast, on the other hand, does not rely on internet users making them a better option and bet for the small companies intending to reach a mass market.

It is not been an easy ride for the FlashCast team so far but the one challenge that they had anticipated at the beginning did not materialize: that is the non-cooperation from the public transport owners and operators. To the surprise of FlashCast many operators are open to the new technology once they get how it works. That should not be a surprise to many following the fact that most Kenyans are open to experimenting with new technology as was seen with Mobile money (MPESA).

The real challenge for FlashCast has come from the unfamiliarity of of the digital advertising by the marketers in Kenya. So the FlashCast team has been forced to act as educators as well as running their start-up. In a broader way they are also proud of the work they have put in to ensure that the market gets to understand how digital advertising works. And now they believe that the market is warming up to the idea, going with the growth trend witnessed in the sector in the past two years.

FlashCast also had expected some problems with Nairobi local authorities but so far things have gone well. That could be due to the fact that the Flashcast gadgets are installed on privately owned vehicles.

Jeremy loves the passion most Kenyans have about technology but he thinks there is not enough financial support. According to him, it is easy to start a company in Kenya but it is hard to bootstrap the business in Kenya, hence the need for broader financial support/funding. The local funding network is not yet developed, as most people with kind of money required to fund start-ups opt to invest in things like real estate. That is why the work done by the likes of Siemens Foundation are much appreciated by the local developers.

This post was created for the Siemens foundation. The blogger was compensated for this work with the amount also covering any travel expenses.