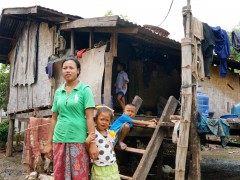 On the cusp of Vientiane’s entry into the WTO, a third of its population continues to live below the global poverty line of US$1.25 a day. The author Johannes Loh describes his observations during a research trip to Vientiane as part of the Asian Trends Monitoring team.

Laos is a country in transition with growing exposure to global markets, increased foreign investment in the country’s abundant natural resources, and a blossoming tourism industry all driving economic growth. At the same time, more than a third of Laos‘s population continues to live below the global poverty line of US$1.25 PPP a day in a society largely dependent on subsistence agriculture. Farming still accounts for 67.6% of total employment, compared with 16.9% of the population who is self-employed and only 15.5% who are wage-earners, according to the World Development Report 2013. In terms of contribution to GDP, agriculture still accounts for 29%, industry for 19% and services for 51%.

The official Vientiane Capital Region extends over 3,920 km2 of which only 6% are occupied by developed areas while 68% are forest areas and 16% paddy fields. With a total population of just over 800,000 people, many settlements in the capital region are still villages. Even within Vientiane good roads are a privilege and often dirt roads represent the only pathway to access essential services such as schools or hospitals.

The booming economic development of the country does not automatically improve access to services – a major issue for the poor. Without a system of social protection, the poor have to rely on relatives and friends in times of economic hardship. For unskilled farmers working small plots of land, the prospects of supplementing a family’s income with a non-agricultural job are very slim.

In Phonethong Village, located on the outskirts of Vientiane, the capital city, I encounter a woman named Kaum – a mother, farmer, laborer, and factory worker – living at the far end of the village. She and her husband own a small plot of land barely capable of producing subsidence level outputs. In order to feed the family, they moonlight as laborers on other villagers’ farms. Kaum also puts in additional shifts at a nearby garment factory. Working at the factory earns her US$50 every two weeks, or approximately US$3.57 a day. That is barely sufficient to feed the family of four, let alone the expenditures for school or investments to enhance their agricultural output. “I would like to open a small shop to earn more money, but nobody wants to give me a loan,” says Kaum. Since her home does not qualify as collateral, she can’t get loans to improve or expand her farm.

Government programs for skills training or small business development do not exist, and the few NGOs operating in Vientiane reach only a small proportion of the people who would benefit from such offers. As Oxfam country director Dominique van der Borght points out, the country’s education system falls short of delivering the services needed in a country that has a rapidly growing economy. Foreign firms often bring their own staff and laborers into the country because local workers lack necessary skills and linguistic training. For the locals, then, only the lowest categories of jobs remain accessible. The Asian Trends Monitoring survey on urban poverty and service provision, conducted in September 2012, showed that among ten categories of basic needs “finding work opportunities” and “saving money” were rated as the most difficult to fulfil for Laos’ poor.

For micro-entrepreneurs who want to take advantage of new opportunities in the emerging non-agricultural economy, another kind of stumbling block is awaiting them. Up until 2004, Laos had no law on microfinance institutions (MFI) and formal financial services were inaccessible for the poor. As of 2012, a number of MFIs are offering savings and loan products, however mostly for clients with collateral. Moreover, their branch network is focused on Vientiane where they serve small, but established entrepreneurs in the city.

In a way, the risk-averse business model of any financial organization helps to better serve those who have already established their business models. For those without collateral, the MFIs do offer group loans, but the reach of those initiatives is still limited. The MFI capacity to provide free business training and actively support aspiring entrepreneurs is very limited, as they still struggle to build reliable client bases to secure their long-term survival in the competitive market.

Founder and executive director of Laos’ first MFI, Ekphattana Microfinance Institution, Somphone Sisenglath, adds that “savings is part of our mission…[…] Access to credit is one thing, but if there is nothing left [at the end of repayment], they are still poor.” EMI makes it a requirement for all their clients to save 10% of their initial loan in order to teach them the importance of savings.

Access to microloans coupled with educational opportunities to learn about small business management would go a long way towards building an additional stream of income for families like Kaum’s who are currently relying on subsistence farming and moonlighting on other farms. Unfortunately, as members of the bottom echelon of society, Kaum’s family and countless others like them do not have access to this type of service.

Mr. van der Borght describes the situation in Laos as having a “different face of poverty.” He explains that importing solutions from places of scarcity may not work in a country like Laos which has an abundance of natural resources but suffers from a chronic lack of infrastructure and a grossly underfunded social service system. Expanding access to education and financial services to families like Kaum’s, as well as integrating them more fully into supply chains, are crucial if Laos is to boost household income for the vast majority of its citizens working in agriculture and non-agriculture industries.