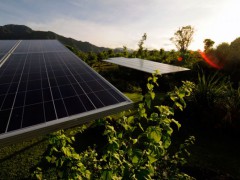 When considering democracy and climate change, it’s clearly not enough to operate on the national level. Climate change is a global problem that requires global answers. But if we wait for a global agreement – some kind of universal acceptance of a legally binding commitment – we could be waiting for quite some time. So in the meantime it’s more productive to step down a level and focus on key players like China, the United States, and member states of the European Union, to see what’s going on there. And then to use that as a starting point to think about what  can be done  to contribute  to a global solution.

This article is based on a number of conversations between Ulrike Reinhard and Peter Burnell, of Warwick University in the UK, and on a presentation he gave in Berlin in November 2010. The article summarizes the present state of play and asks three basic questions, which will hopefully spark some lively debate on this site.

Are democracies addressing the climate challenge better than non-democracies?

First, the “established” democracies have yet to demonstrate that they will rise fully to the challenge of climate change mitigation by reducing their own greenhouse gas emissions, let alone by underwriting climate mitigation and adaptation elsewhere.

Also, countries that are transforming towards stable liberal democracy know that the process of democratization itself can be very challenging. Ask the people of Kenya or Thailand. What’s more,  democratic transformation may be hindered by other huge challenges concerning the economy, society, the state, and quality of governance. No-one can reasonably expect that tackling climate change will be their leaders’ top priority, even though the harmful effects of climate change might actually make the process of democratization much more difficult.

And finally, the ability of public and other institutions to do things effectively and efficiently is calling into question the role of government as an essential political ingredient for successfully addressing climate mitigation and adaptation.

Against this background Peter Burnell asks the following three questions:

1. How do different leadership styles affect climate politics on the national level (and vice versa?)

With regard to climate politics it seems clear that we need leaders who are reliably informed, make sound judgments, excel at communicating with others and can present arguments persuasively and in ways that mobilize wide support for courses of action that may be uncomfortable for some groups. This in turn requires that ‘we the people’ have confidence in our leaders, but such confidence  is not found in every society, and certainly not in all democracies, where there are reported differences between popular levels of trust in politicians and trust in leaders of other social institutions – the media, teachers, the churches, the judiciary, and even the military.

Non-democratic political systems can indeed give rise to leaders who command respect: for example I would not be surprised to hear that former President Putin’s approval rating in Russia exceeds that of President Obama in the United States today. But maybe democracies do provide more opportunities for leaders of social institutions to gain access to political leaders, and offer more mechanisms for peacefully removing from office politicians who lack the right stuff.

So perhaps political incentives are just as important as leadership styles. It is necessary to recognize that political structures can either motivate, or conversely deter, political leaders from even attempting to lead society in responding to climate change to the extent that scientists increasingly say is necessary.

2. When dealing with the specific challenges of climate change, how does the political regime of a country influence policy-making?

The worrying answer is that the electoral cycle associated with democracy tends to impose rather short-term and inward-looking political horizons on the outlook of elected representatives. But climate stability is a long-term global public good. Good electioneering does not consist of telling voters what they might not want to hear – that they have to change their lifestyles, for instance, or dampen economic growth for the sake of reducing greenhouse gas emissions at a time when many of them may still be very poor. Think of India for example. Governments that are not democratically elected do not face this problem.

However, the good news for democracies is that they may be more inclined to respond to citizens who are harmed by climate instability and disastrous weather events. In short, democracy may be good for climate adaptation, protection and compensation, even if the jury is still out on whether it is necessarily always best for reducing CO2 emissions.

The jury is still out partly because change of regime in countries undergoing transformation does not automatically produce what has been called ‘good governance’. It certainly may not speedily enhance the state’s capacity to act promptly, firmly and decisively when facing those complex and increasingly urgent environmental, social, economic, financial and political problems that a changing climate represents. To give an example: if China was thrown into turmoil by political change, what might that do to its world-class program of investing in renewable energy with the aim of reducing its future emissions load?

3. Are democracies that encourage people to have a say in policy-making, and which encourage cooperation between enterprise and government, really more ‘climate-proof’?

The key here is to ask which question goes straight to the heart of the matter.  Which is the one approach that movers and shakers in the rising generation should be most focused on?

Is it that we should be aiming to climate-proof democracies and democracy as we know it against the threats that climate change poses directly and indirectly? If so it would make sense to accept those newer democracies that are doing good work in reducing climate change, but which may lack some of the social and economic conditions commonly associated with stable democracy.

Or is it the rather different question that asks whether we should be setting our sights on making democracies, our democratic models and the idea of democracy itself, more fit for purpose. This model holds participatory democracy at its heart, and is dedicated to meeting the challenges of climate change, both in terms of adaptation and mitigation.

These two questions are different even if they are related. Both call for imaginative thinking, and that’s precisely where we need to step in.

Maybe it’s us who really know how to make change, especially in those places where strong community-based institutions match popular support and energy. Maybe it is up to us to take leadership and come up with fresh ideas.