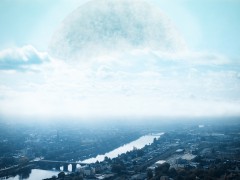 When it was first observed in 1970, Earth Day (22nd April)  was seen as a moment to learn about ecology, and to raise a common voice against such obviously environmental issues as oil spills, toxic dumps, pesticides, the loss of wilderness and air pollution. Twenty million people are said to have participated. Today, more than 500 million people are expected to participate in Earth Day activities in one form or another, and our Future Challenges authors are taking part, too.

Many people around the world, including the Future Challenges community, have recognized that these environmental issues are actually tightly connected with other trends in our lives. In 1970, the world’s population was approximately 3.7 billion. The world population is now almost double that. The integration of the global economy at that time was nothing like it is today, as we see in the regular financial crises that now ripple their way around the globe, regardless of where they may begin. In 1970, the United States was the world’s largest economy, followed by the isolationist Soviet Union. China fell 8th in the list, and Brazil was nowhere to be found. As of 2010, though the United States remains at the top, China is in second place and Brazil is comfortably in the top 10, while the European Union has risen to be the world’s largest economic community and the Soviet Union has disappeared, leaving the Russian economy hanging on to the top 10 by the skin of its teeth.

Today, more and more people believe that overuse of our environment is, whether “right” or “wrong,” at least unsustainable, and that it is thus something that we must manage. It could be said that there are two camps emerging: those who believe that policy-based solutions are the best, and the most likely to be successful; and those who believe that market-based mechanisms are the only realistic way to manage resource usage. The concept of ecosystem services – that is, of quantifying the benefits provided to all of us by our surroundings – is beginning to gain prominence as a way to force us to consider the cost of services we have previously considered “free,” while at the policy level calls for regulation to discourage or prevent overuse of limited resources are growing ever louder.

Which way is the right way? What works, and what makes successful strategies different from community to community, and from culture to culture?

Most recent Local Views on ‘Earth-day’