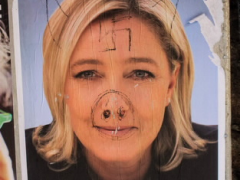 “By the way, has Madonna given back the children she stole from Africa? Or did she end up buying them?” asked Marine Le Pen, after the singer imposed a swastika on her face during a concert.

The Front National (FN), an extremist far-right party led by Marine Le Pen, won a staggering 18% of the vote in the first round of this year’s French Presidential elections. This populist, nationalist, anti-immigrant party has in the past few years shifted from the fringes of the political spectrum to the core of French political debate.

Two short-term factors help explain why the FN has been particularly successful in recent years. Firstly, France has fallen victim to unfavourable economic circumstances. High unemployment (around 20% for those under 25), stagnant growth, a pressurised euro and austerity have created great anger in France, as in many other European countries. This has dragged voters away from the discredited centre-ground and towards the extremes. Secondly, the FN has been galvanised by the spirit of their leader, Le Pen.

Elected in January 2011, Marine replaced her father, the ageing Jean Marie Le Pen, as the leader of the FN. A charismatic woman, Marine Le Pen is both determined and a shrewd strategist. Since she has taken charge, the FN has not greatly changed its extremist, nationalist ideology, but Le Pen has rejuvenated the party and given it a vote-winning face. She has roused the movement, attracting more women and young people to a previously patriarchal and decaying party.

This has been no mean feat, achieved partly through her charisma and oratorical skills, but also through astute political thinking. Understanding that not all FN sympathisers are xenophobic, she discarded the neo-Nazi, anti-Semitic vitriol of her father and replaced it with a strong anti-immigration, anti-establishment, and Islamophobic message, exploiting people’s fears without damaging her respectability.

Le Pen has also taken advantage of key political events, casting herself as a defender of the French nation. For instance, after the shooting by Mohamed Merah, a 23-year-old French-Algerian Islamist, she spread anti-immigrant sentiment by asking the French public, “how many Mohammed Merahs in the boats, the aeroplanes, which arrive each day in France?”

Dr Sudhir Hazareesingh, an Oxford fellow and specialist in French politics, believes that a number of long-term issues in France have acted much like a political “snowball”. Individually they are not particularly significant, but together they have huge political momentum and have helped push the FN to the forefront of French politics. One of these key issues is concerns over the future viability of the European Project. The FN has seized upon the people’s fear that greater European integration will lead to fewer jobs.

Another key issue is immigration. By equating the number of jobless with the number of immigrants, the FN has used worries about immigrant numbers to help increase populist, anti-immigrant sentiment.

The FN is not just anti-immigrant, but also anti-Islam. In recent years, migrant populations have also been predominantly Muslim; the two highest immigrant populations from outside Europe are Algerian and Moroccan. Generic fear and suspicion towards immigrants have now been channelled into a clearer sense of Islamophobia.

Yet arguably one of the principal reasons why the far-right has been so successful is that it has been allowed to be. The mainstream parties have completely and utterly failed in challenging the dogma of the far-right. The left was humiliated in the 2002 presidential election when they were faced with the choice of two right-wing candidates: Jacques Chirac and the previous FN leader, Le Pen’s father. Parties across the political spectrum vowed to learn the lessons of this failure, but since then they have not addressed any of the major issues which caused the rise of the far-right vote.

Before Jean-Luc Melenchon, leader of the Left Party, made an impact in the election this year, no party has properly represented the working class. No party has addressed the needs of the vulnerable or the unemployed, and nor has any party solved the underlying economic issues in France, including the chronic problems in the impoverished banlieues – the poor French suburbs which rioted in 2004. Former French President Sarkozy did not do enough, and the socialists have failed in local politics.

In many regions of France the Socialist Party has been in power for decades, but in key battlegrounds such as Henin-Beaumont, voters are turning away from the mainstream parties due to their ineptness and corruption. In 2009, the incumbent Socialist mayor resigned due to a scandal involving corruption, and in both the consequent mayoral elections, as well as the following presidential election, the FN captured over 35% in both of the first rounds.

However, the success of the far-right is also partly due to the failings of the voting system. Politicians from across the spectrum don’t openly oppose the populist policies of hate politics because they know that they will need extremist votes come the second round. In the second round of this year’s presidential elections, Sarkozy pandered to the far-right vote, spouted Islamophobia and talked of France returning to its “Christian roots”. It is a combination of political cowardice and the voting system which has helped to prevent a true challenge to the xenophobic politics of the FN.

It seems that the far-right is now structurally embedded in French politics. The party has a strong regional apparatus in the north, the east, and in the Provence-Alpes-Côte d’Azur. The question now seems to be whether the centrist politicians can stand up to the sentiment of the far-right and combat the key issues which contribute to its success, or whether they will continue to kowtow to Le Pen and her cronies.

Jamie Pickering is a member of Global21, a student network of international affairs magazines and a partner of FutureChallenges. A longer version of this article was first published in The Oxonian Globalist.