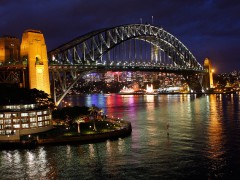 Promises of employment and education opportunities have always lured country folk and many women to the “big smoke”. Over 83% of Australia’s population lives in major urban areas, while many rural towns are dwindling in population. The Longitudinal Surveys of Australian Youth (2007) show that more than one third of young Australians from non-metropolitan areas relocate to a major city after leaving school. Although some eventually return, rural and regional areas have experienced a net loss of a quarter of their young people. However, city life for women comes with challenges as well as opportunities.

The recent Australian Longitudinal Study of Women’s Health which surveyed some 40,000 women reveals that while women in rural areas experience overall poorer physical health than women living in urban areas, their  overall mental health is better. Put briefly, women in cities experience more stress, anxiety and mental health problems than women from rural and regional areas. The personal stories of my friends Natasha and Emma* who both moved to the city from rural areas corroborate this finding. Natasha Odgers is adamant that a strong sense of community is something clearly lacking in cities, a lack which subsequently translates into scarcer social capital and poorer mental health.

Natasha Odgers is a successful environmental and community planning consultant who moved from her parents’ farm in Uralla (population 6000) to Brisbane (population 2 million) to attend college. She could have studied at Armidale, the next closest township, but felt she wanted a “bigger life experience.” Moving to Brisbane was both exciting and intimidating. Having grown up in a close-knit community, she was surprised to find that not everyone in her new hone shared her sense of community, and that “many people don’t even know their neighbours.” Indeed, Natasha’s experience tallys with findings of the longitudinal study, which suggest that women living in rural areas have better mental health than women living in cities, due to stronger social capital and community ties.

Natasha believes a major reason why “country people” have a stronger sense of community is out of sheer necessity. She gave the example of bushfires – poor telecommunications means that neighbours often have to rely on each other for information and help in times of need. In times of crisis, such as bereavement or sickness, Natasha says the whole community of Uralla would come together to provide the afflicted individual or family with home cooked meals. This confirms previous studies which suggest that people from lower socio-economic backgrounds, including those in cities, have stronger community ties. Natasha  and Emma also feel that the rural lifestyle with its “wide open spaces and simple lifestyle” contributes to better mental health,  compared to the rush and stress associated with city life.

Nonetheless, lack of education and employment opportunities is a major reason why many young women choose to leave the country. Originally from Spring Ridge (population approx. 400), Emma is a nurse who first moved to boarding school on the New South Wales Central Coast at the age of 12 and later to Sydney for university. Natasha and Emma are not alone in this trend. Both women say that of all their friends, perhaps only 2 or 3 have stayed put while all the rest have moved to cities. The statistics speak for themselves: from 2003 to 2008, population growth in rural Australia was 0.3%, compared to 1.5% for the Australian average. According to Natasha, the only girls from her high school class who stayed in Armidale were those from lower socio-economic backgrounds, girls who were not career minded.

This would appear to corroborate findings of the WHA, which shows women from rural areas are more likely to be married or in a permanent relationship, more likely to have children and more likely to want to have three or more children by the time they are 35. This forms part of the developing polarisation between women who have an interest in pursuing further education and delaying motherhood, and young mothers who do not have an interest in pursuing further education, among which rural women are disproportionately represented.

On the other hand, Emma feels that the lack of educational opportunities is not as big an issue as it used to be, due to improvements in telecommunications and the internet, which facilitate options such as distance education and online learning. As a nurse, she also feels that technology is helping to bridge the gap in healthcare. She gave the example of a friend with a lung tumour who was able to have teleconferences with her doctor, and avoid the long and costly trip to Sydney.

Overall, both Natasha’s and Emma’s stories are broadly reflective of a wider trend of rural to urban migration by young women aspiring for better education and employment opportunities. Natasha admits that career-wise, she would not be where she is now had she stayed in Uralla. However, as these women’s experiences and wider studies suggest, such a move is not without challenges. Indeed, after successfully establishing her consultancy, Natasha moved away from the city and out to the more close-knit community of Diamond Valley, where she feels it is easier to maintain her connection to the land and to her local community.

Agricultural area of Liverpool Plains, NSW, by kateausburn, on Flickr CC BY 2.0

City life may be more “exciting,” but it is also more stressful, and a bigger population appears to be associated with a diminished sense of community. Rural women have proved to have better mental health and stronger community ties than their city counterparts, in the face of challenges such as isolation, limited work opportunities, and vulnerability to climate change. It may be time for those of us living in the city to make an effort and get to know our neighbours, join a community group, or spend more time in open spaces. In doing so, we can learn from rural women like Natasha and Emma to enhance our own sense of community and social and mental well-being.

*Not their real names