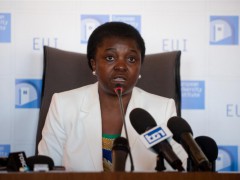 Cécile Kyenge, the first woman of colour to become a minister in Italy. Photo taken by the European University Institute on May 9th 2013, Flickr (CC BY-SA 2.0)

Many young Italian women will still be able to see themselves in such snide remarks taken from the Mona Lisa Smile, a movie set in the 1950’s.

Women in Italy study for longer than men and, although their chances of finding employment increase with higher qualifications, they are far more likely than men to be underpaid and to lose or abandon their job with maternity.

I spoke to Elisabetta Graziani, a young Italian graduate and journalist, about how she manages to cope. At the age of 25 she has a Bachelor’s degree, two Master’s degrees and was awarded a scholarship for her achievement in her first Master’s. Unable to find employment in her own discipline which is history, she now works as a Press Officer and External Relations Assistant for one of the major corporations in Italy. Despite her excellent qualifications, her job “is not well paid and does not give employment certainty”. Ms Graziani is career-oriented, but when I ask her if she feels being a woman is a hurdle for her career, she draws a precise picture of what being a woman and worker in Italy looks like: “Given the nature of the contracts we are offered, it’s extremely easy to be fired if you get pregnant, and I also know of women who did not get jobs because of the ‘risk of pregnancy’. We have to keep fighting the prejudice in our society that a woman’s career can be sacrificed for her family and her husband’s career”.

In Italy certain biological features, such as sex or skin colour, are so heavily charged with cultural connotations that they can play a key role in shaping your life. What Ms Graziani talked about is not confined to the lower rungs of the career ladder but can happen at a level as high as that of a government minister. The barrage of abuse directed at Cécile Kyenge since her appointment as minister is a prime and particularly revolting example of this. The criticism directed against her reached its peak with the outrageous comparison between the person of the minister and an ape made by Roberto Calderoli in his capacity as vice-president of the Lower House of Parliament and member of an extremist party. The racist slur has nothing to do with the ability of Ms Kyenge to carry out her duties and is entirely directed at her as a woman of colour. Yet the appointment of Ms Kyenge as Minister for Integration, also carries well hidden signs of such discrimination, resting on the supposition that as Ms Kyenge has personally experienced the process of integration in Italy, she cannot therefore be accused of incompetence. The fact remains that her holding a degree in medecine carried less weight in her appointment as minister than the fact that she is a woman of colour.

Even though in Italy it’s the biology of women that still determines their employment opportunities, successive Italian governments have consistently chosen to do nothing about such discrimination.

Statue of Jeannette Rankin, first woman to be elected to U.S. congress. From the author’s personal archive.

Bad management of this endemic problem has meant that female employment has borne the bear the brunt of the 2008 economic crisis. The expertise that women possess, and their skills and commitment have next to no impact on the economic growth of the country. In the long run such exclusion translates into the impossibility for women to change from the inside a male-shaped, male-dominated system of work into a more “female-friendly” one, where women can fulfil their career goals and maximise their contribution to the Italian economy.

The untapped potential of educated women is a loss-loss scenario and reinforces their marginalization on the employment market. Reminded as we are by the World Bank of the mere 1% growth in GDP that was all Italy managed to achieve between 2003 and 2012, female unemployment is a phenomenon Italy cannot afford to maintain. Women have to be given the chance to employ the capabilities they acquired through university education at the highest level. These are the requirements set by competitiveness in the global market. Italy cannot neglect them, for women’s and for its own sake.