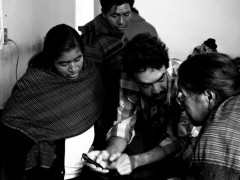 Can you imagine our interconnected world without internet? For those born in the digital era, as well as older generations that have assimilated the daily usage of information technologies, it is difficult to picture life without access to the network. Our lives would be completely different, we would not be able to do many of the things we consider normal today: no Twitter, no Facebook, no Google, or worse still, no FutureChallenges.org to read.

Unfortunately, for 56.5% of Mexico’s population, it is difficult to imagine life with internet. Due to the high levels of poverty and income inequality in the country, securing access to information technologies for the entire population is currently quite impossible.

The term for this phenomenon, known as the Digital Divide, was popularized after the Clinton Administration’s “Falling Through the Net: A Survey of the Have Nots in Rural and Urban America” report in 1995. It consists in the lack of equal opportunities to access technology and the economic gap that this creates in the poorest layers of society. When this happens, a new chain of poverty is generated and those without access to modern tools get trapped into digital illiteracy, thus decreasing their competitiveness in the labor market.

Information technologies act as catalysts of development because they generate productivity, provide constant access to information, optimize business processes, sponsor innovation and create opportunities for members of the information society. Perhaps that is the reason why surveys indicate higher socioeconomic status and higher levels of education tend to correlate with a higher probability of being an internet user in Mexico.

According to information from Consulta Mitofsky, the rate of interconnectivity for the richest individuals reaches 83% of the population, while for poorer sectors it represents less than 30%. A very similar pattern exists with schooling, where individuals with the lowest studies show a rate of 13.1% of access to the network in contrast with 91% of the most prepared population.

Another important factor to consider is the gap between rural and urban areas in Mexico. Information released by The Competitive Intelligence Unit (CIU) in 2012 indicates that 51% of rural households possess mobile phones, but just 8.3% have a computer and 3.6% have access to internet. By contrast, 80% of urban households have mobile phones, 36% computers and 30% access to internet.

But providing interconnectivity and information technologies to poorer population groups is nothing simple. The lack of infrastructure for supplying a generalized service and economic resources to buy equipment poses a very big challenge for the country.

So far, the recent inclusion of the right to connectivity in the Constitution represents the will of the Mexican government to combat the Digital Divide. This action is complemented by the National Digital Strategy, which recognizes the importance of information technologies for development and mentions some of the most urgent issues to solve.

Nevertheless, these initiatives have so far proved to be insufficient due to the lack of clear objectives and a specific action plan. The details are currently being debated as part of the secondary laws to the recently approved telecommunications constitutional amendment. It is now necessary that the population scrutinizes the process of discussion thus ensuring that the resolutions seek for more competition within the market, leading to a more inclusive environment with higher quality and cheaper services.

Another crucial step: the government must collaborate with the private and civil sectors to promote both higher investment in infrastructure and research for cheaper methods of providing coverage. A public-private partnership could be useful to sponsor innovation programs such as Google´s Loon project, but government oriented and adapted to the Mexican reality. Another great opportunity could be to support initiatives such as Rhizomatica’s successful interconnectivity project in Talea de Castro, Oaxaca, an indigenous population which is now operating its own local mobile supplier.

As well, there must be government support to promote participation in educational events and initiatives. Some examples could be Telmex’s Village and Movistar’s Party (both events that sponsor the digital culture), or civil “Internet para Todos” that informs the people about their rights and current digital issues.

Narrowing the digital divide is necessary to achieve equal opportunities in Mexico, otherwise, poverty will continue as a never-ending cycle. It is very important that both the private and public sector continue to collaborate with social organizations so that innovative paths are created to promote access to the internet and information technologies as a right.

Today 67.8 million households in Mexico lack connectivity, which means that more than half of the population is missing this opportunity to get out of poverty and isolation from development. Equal opportunities lead to equal income, and equal access to information technologies leads to equal opportunities.