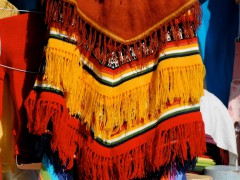 Poncho in Cochabamba by Rocco Lucia on Fotopedia – CC BY 3.0

In present-day Brazil immigration has once more taken a pole position in public debate as the estimated population of Bolivians living in the country has reached the 350,000 mark, further adding to the heady cauldron of very mixed cultures. In 2009, a federal law ensured the regularization of some 45 thousand foreigners whereas a Mercosul agreement made it possible for citizens from member countries (Argentina, Brazil, Paraguay, Uruguay and Venezuala) as well as from Bolivia and Chile to obtain a two-year visa to reside in any of these countries.

The landscape is indeed changing. Walking around downtown São Paulo in the areas of Luz, República and Sé, you can spot Bolivians selling artisanal jewelry, playing the flute, and trading counterfeit goods next to the usual crowd of often homeless peddlers. Pari, the area around the Armenia station, is another case in point; it’s packed with Bolivians who enjoy their street market on Sundays, eat salteñas, hit on pretty girls and practically ignore the occasional Brazilian customer.

All in all, they seem happy to be making a living in Brazil even though Portuguese is still a language barrier. They were very friendly when I asked them a few questions in my horrible Spanish, and they kept looking at me and giggling as I tried to figure out what was at the bottom of the very sweet tea I was drinking; it was not an organ from some unidentified animal as I suspected, but a peach.

Some of them have lived here for years, whereas others keep arriving by both legal and illegal means. International networks entice poor Bolivians with the promise of good jobs in Brazil only to exploit and threaten them when they arrive which is easy as their lack of proper documentation makes them especially vulnerable. Human rights violations of this type have recently been associated with big brands names such as Zara, Luigi Bertolli, and Marisa and are indicative of a serious problem of marginalization.

Naturally, Brazilian history is largely an amalgamation of immigrants’ stories. Portuguese colonizers, slaves, European colonies, the Japanese, and settlers from ex-Portuguese colonies are the living evidence of the diversity that defines the national cultural landscape. Nonetheless, neighboring countries are occuping an increasingly large part of this cultural mosaic as a new wave of Latin American integration unfolds.

This can partly be explained by Brazil’s rise as a major economic power which has helped the country consolidate its soft power, and lure citizens from across boarders to enjoy an often open and warm reception in a place full of promises of a better life.

As borders are crossed, some boundaries fade away, and a process of assimilation takes place as Brazilian modernists of the 1920s had anticipated it would. Avant-garde artists referred to “anthropophagy”, the process of recognizing foreign influences while refusing to be exclusively molded by them since they should not be swallowed without serious reflection. The result is a “digestion” of influences that translates into something completely new and one hundred percent Brazilian. At every turn in our history this approach has prevailed and its immensely rich and unique results have influenced our music, culinary, language and much more.

One can only imagine the real impact of the arrival of Bolivians in Brazil, but for now unsurprisingly they occupy a marginal position given their poor social and economic status. Hopefully, once the state pays proper attention to the conditions in which they live, integration will happen a lot faster.

As Brazil progresses economically, new responsibilities arise; traditional social aspects of development like poverty and inequality are brought to light while at the same time challenges previously the province of developed countries emerge. In this context, Bolivian immigration becomes a pressing issue, for blending properly with yet another culture promises plenty of delightful results to judge by our history.