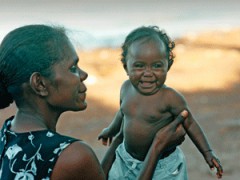 Since the first Gold Rush 160 years ago, Australian history has been tainted by a conflict between mining and indigenous land rights. Aboriginal communities have long been excluded or abandoned by government – forced off their lands into settlements and ignored in terms of health care, resulting in statistics that should make us feel ashamed, including a life expectancy almost 20 years lower than for the general population. It is no less than ironic that it has largely been left to mining companies to provide the major investment in Aboriginal communities, including health care. After watching some eye opening documentaries including Our Generation and Dirty Business, I have come to realise there are probably no indigenous communities in Australia that truly want mining on their land, which they consider their very life and soul – and if they do agree to mining, it is because they see there is no other choice. Recent research suggests the best way to achieve better health outcomes for Aboriginal communities is to allow them to move back on to their homelands and re-adopt their traditional way of life. Indeed, connection to land is essential in a “holistic” approach to health – including physical, emotional and spiritual, and it is only when our government takes this into account that we will see long-lasting improvements in Aboriginal health.

History of mining versus land rights

Only one generation has passed since Aboriginal people were recognised as rightful owners of their land. Time and time again, the government and courts have failed to protect Aboriginal people against the might of mining. For example, the Ranger Mine in the Northern Territory paid royalties since 1978, but 20 years later, all it had to show was a fractured community, including Aboriginal people marginalised on their own land. Today, indigenous people don’t have the right to stop a mine, but at least they have the right to negotiate the best deal.

In the 1960s small groups of Aboriginal people, usually families, began moving back to their traditional lands and waters, known as homelands. Approximately 30% of the indigenous population of the Northern Territory now live on homelands. Homelands allow Aboriginal people to maintain their spiritual and economic connection to their land and raise their families within their traditional culture.  Studies have shown that Aboriginal people living on homelands have better health and live longer. Living on the land allows Aboriginal people to have more self-determination and control over their lives, while preserving their traditional languages and culture. There are economic benefits, too. In the Northern Territory, homelands make up a central element of the tourism industry, making up 6% ($776 million) of the territory’s economy. Nevertheless, homelands continue to be largely ignored in terms of health and infrastructure investment, which remains largely concentrated in settlements and mining towns.

Where to from here? The relationship between land and health

Health is not just a matter of access to facilities and services, although these are clearly important. It’s also a matter of heart and soul, of connection to others and to the things that give meaning to our lives. For indigenous communities, this is ultimately land.  In the words of one woman from the Northern Territory town of Elliot, “Let me assure anybody who cares for the Aboriginal people of Australia that once we are moved from our place of origin, we will not only lose our identity, we will die a traumatised tragic end. We must stop this, and we must remain on our country. It’s not [simply] attachment to the land, it’s survival of a cultural practice that is still alive in spite of what has been thrown at it.” If our government truly wants to “bridge the gap” between indigenous and non-indigenous health outcomes in Australia, it must commit wholeheartedly to protecting the rights of indigenous people, and most fundamentally, their rights to the land (including powers of negotiation in the face of mining giants). Government policies aimed at improving the health and welfare of indigenous people must be accompanied by genuine consultation and adequate investment in infrastructure and health care, including on homelands. If not, our history and reputation will continue to be tainted by shame.