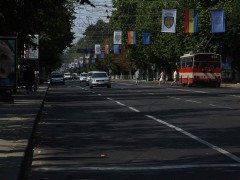 The Republic of Moldova, strategically located in Eastern Europe between Romania and Ukraine, became well known on the European continent after setting a pro-European vector with relation to its foreign policy. As a result of the effective implementation of a series of reforms and continuous diplomatic efforts, in April 2014, Moldova became the first country from the Eastern Partnership to obtain a visa free regime with the European Union, for short periods of stay (90 days). In the same context, another major step was the signing of Association Agreement with EU in June 2014, which included the Deep and Comprehensive Free Trade Area.

Despite the fact at the international level, these are important achievements, which clearly define the state’s policy and bring large responsibilities on local authorities, the majority of the country’s 3.5 million citizens are divided in opinion about the general development of the country, based on their own understanding of the prevailing international situation nowadays. The results of the past parliamentarian elections from November 2014, show that the supporters of pro-European parties (who eventually formed the Government) are almost equal in numbers with voters of pro-eastern/pro-Russian parties.

In less than half a year later, the balance seems to have changed.

In April 2015, the Public Opinion Barometer, a research program developed by the Institute of Public Policies, surveyed a sample of over one thousand people, from 85 localities, which revealed that if next Sunday a referendum regarding Moldova’s adherence at EU were to take place, 39.5% would vote in favor, while 41, 8 % will vote against it.

The discredited political class, which created a minority parliamentary coalition (including the Communist party), the fraudulent schemes that generated a huge hole in state budget, together with the high level of corruption in state institutions are only a few reasons that made people lose their trust in a bright European future, as the idea of European integration is associated mainly with politicians who promised it during the past six years. Against this background, the prospect of closer relations with Russia and the integration in the Customs Union gained more and more supporters, especially from those who have lower living standards and lower levels of education.

Other results of the Barometer show that although the majority of people prefer local media, 40.3% of people receive information from Russian TV and radio broadcasts, which have a level of trust of over 46%.  The media from the European Union and Romania is preferred by only 10% of responders, and is trusted by 34%. Unsurprisingly, the best rated foreign politicians are the Russian President Vladimir Putin, followed at a difference of almost 20% by the German Chancellor Angela Merkel, the Romanian president Klaus Johannis, and the President of the United States, Barack Obama.

The fact that Russia is running a disinformation campaign, with pronounced elements of propaganda, oriented toward Russian speakers from abroad, mainly former soviet countries, is not perceived by the media consumers, who have no alternative sources of information. If at a point the campingn was mainly focused on the Ukrainian war, it now also targets the western idea per se, reminding us somehow of the informational battle that was developed during the Cold War. This strategy of keeping the pulse of the region by creating internal discrepancies, seems to be an efficient one in the case of Moldova. This context threatens the further development of affairs, and at a local level, the resources for counter-propaganda appear to be limited.

The Ministry of Foreign Affairs and European Integration launched an information campaign in 2014 to combat the myths about the EU, but the forecasted results were overestimated, with a possible change of people’s perceptions not being reflected in further analysis.

What can be done? A system-wide approach is necessary, elaborated and implemented with the active involvement of authorities and the media. An efficient measure would be to create a legal framework that limits or interdicts for a period the broadcast of propagandist Russian newscasts. Besides investing more in fact based, logical counter-propaganda, it is also necessary to invest more in quality, accessible journalism, which will greater emphasise the similarities between the Western and Eastern world, in terms of values, peaceful aspirations and progress.

New media could be the way to reach young people from remote areas, who have either limited access to information, or no interest in analysing the information that they receive through radio or TV. In Moldova, approximately 70% of the population has internet access, which is an advantage that should be valued. As long as there is no strategy in this regard, singlular efforts made by particular media outlets are meaningless.

Although there are no official, concrete data about the number of Moldovan citizens who are living abroad, due to illegal immigration, the estimated number is half a million, the majority of which are working in Russia. At a year from visa liberalisation, approximately half million people from Moldova traveled to the EU and returned. There is the hope that, long-term, people who are able to travel freely both to the east and west, will become more aware of the regional reality and develop critical thinking regarding state’s foreign policy, based on their own experiences.

Even if internally, international affairs are confusing for the majority, and matter only as much as they can guarantee the improvement of living standards, the attempts at making Moldova positively known abroad are more consolidated than ever, with the government acknowledging the necessity to create a country brand, in order to show the world this tiny country with vast potential in a positive light. “Moldova: Discover the routes of life” is the new slogan for promoting the country abroad. If it will manage to reveal to the foreign public the many surprising reasons to visit it, other small and positive changes might follow. I believe that a change of perception requires time, and comes naturally, being generated by personal experiences, in time breaking the inoculated stereotypes.