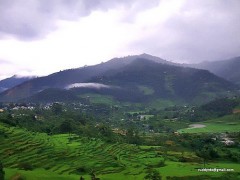 Managing forests and conserving biodiversity is challenging for a  developing nation; and democracy does not guarantee success. Peter Burnell even questions the assumption that democracies are better for sustainability:

“Conventional wisdom maintains that democracies are better for environmentally sustainable development than non-democracies. But that conventional wisdom needs to be qualified:
First, the “established” democracies have yet to demonstrate that they will rise fully to the challenge of climate change mitigation by reducing their own greenhouse gas emissions, let alone by underwriting climate mitigation and adaptation elsewhere.”

So is it more about the willingness of leaders to accept the green challenge and the commitment of the public at large rather than the particular form of government? And how does this relate to democracy’s newborns like Nepal? Nepal’s forests are under siege. Overexploitation, illegal logging, and political interference have devastated the once lush green acres that flourished across the country. Community forests so far have been one of the few saving graces, mobilizing the local community and partnering with local government to protect local forests and pastures. Unfortunately, the success of Nepal’s community forests has done little to stop overt political interference from various political factions and the Government itself.

The future of Nepal’s community forests, in light of the proposed amendment and growing commercial and environmental pressure, is now being questioned. The Government is working to amend the Forest Act of 1993, restricting the rights of community forest groups to curb rapid deforestation and illegal logging. The process so far has not been transparent and inclusive as far as stakeholders go. A petition I initiated asking the Government to address the concerns of the people attracted support from concerned experts, citizens and well wishers from various parts of the world. Community forest supporters are also lobbying to get their voices heard and the media has provided space to those critical of the Government’s ways.

Although there has been no official word from the Government or the Ministry of Forest and Soil Conservation about their willingness to embrace transparency, at least the campaign launched by community forest groups has not attracted any overtly negative response from the Government. Whether the Government’s blind eye is to be celebrated is debatable. Yet it does present a change from the way protests are handled in neighboring China or in other undemocratic parts of the world. Even so, if the Government really cared about democratic norms, it would have started the amendment process in a very transparent way.

Nepal is also grappling with the problem of widespread wild fires. According to the BBC, more than 220 forest fires have spread across the country. Efforts to put out the fires, fire prevention and the rehabilitation of  the damaged habitat have all been dishearteningly slow and shallow. Yet is Government inaction being blamed? No, because the tragedy goes unmentioned in the media and is off the public radar due to a  lack of transparency and  public apathy.

A democratic system allows the public to get involved and demand better governance. Such freedom and openness sometimes push important issues onto the back-burner, which hurts  a country’s institutions. For a fledgling democratic state like Nepal, relying solely on the institutions and the Government to make good decisions regarding the country’s forests and environmental issues is thus an invitation for failure. The role of an informed and involved citizenry cannot be overestimated. The example of Nepal shows that the form of government in itself is no guarantee of success or failure, it’s the  involvement of the people that still holds the key.