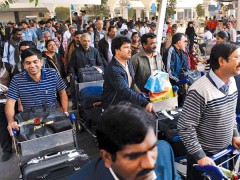 A Nepali migrant worker in the Middle East. Image by the apostrophe, via Flickr. CC BY-NC-SA 2.0

Discussion on migration in the Nepali context is more often focused on the economic aspect. Looking at how much the country relies on remittances received from migrant laborers, this may not seem so strange. In his post in the UK Guardian on what motivates migrant workers, Jonathan Glennie remarked that:

“Remittances now contribute around $3.5bn a year to Nepal’s annual income, up from just $50m in the mid-1990s, and equivalent to almost a quarter of GDP. In fact, the figure is probably substantially higher as remittances are routinely underestimated; the rule of thumb is to add 40% to the official figures.”

Along with economic migrants – who usually head to the Middle East, Malaysia and India for work, there are also migrants who seek opportunities in countries outside these popular destinations – in North America, Western Europe, Australia and parts of Africa.

According to the  Central Bureau of Statistics (2009) , “remittance inflow from India stands at 13.4 percent, Malaysia at 19.2 percent, Saudi Arabia at 14.5 percent and Qatar at 21.5 percent of total remittance receipts.” Contributions from migrants outside of the these countries is around 30%

Nepali newspapers and commentators routinely discuss how the remittance flow affects various sectors of the economy and whether the country is utilizing this resource in a proper manner. Yet the cultural and socio-economic impact of migration remains comparatively underreported.

Recently and exceptionally, a Nepali language magazine published a lengthy report on the  growing incidence of divorce, marital discord and financial mismanagement in the migrant worker community. The storyline in many of these cases is similar: the spouse goes to work abroad and the lonely better half left behind at home gets romantically involved with someone else. The new couple takes the worker’s hard earned cash and gives divorce papers in return.

As the family crumbles, it’s the children and elderly family members suffer more. There is very limited infrastructure in Nepal, in terms of caring for abandoned or neglected children and the elderly. Because traditionally these duties have been confined to the extended family, society as a whole is very slow in providing care and support.

I belong to the class of migrants who don’t send money home, but have  rather found a new home in another country and are trying to hold on to what little pieces of Nepali culture they have been able to salvage. In the economic sense, we are bad debts or underwater investment for Nepal.

My effort to keep Nepali culture alive at home receives a setback every time my daughter asserts her right to her own life. As she gets more American, I find it difficult to strike the right balance between her Americanness and her Nepali heritage. I certainly don’t want to keep her in bubble wraps where she is isolated from her peers, but I do fear that one day she will see me as a foreigner.

Migrants and immigrants like me  are living in a cultural maze and don’t know which way to turn. Some of us confine ourselves to cultural social or religious ghettos in an effort to save our life and culture. The same life and culture that we so gladly left behind when an opportunity for a “better” life presented itself. Then there are those who forget the past and immerse themselves fully in the new – or make an effort to do so and live in a cultural potpourri.

My daughter is not going to love Nepali music, and its pop culture icons the way I do. She will also miss out on the finer points of Nepali life – the extended family, the compromises, the realities of life in an economically struggling country. We are different, and that reality can’t be changed.