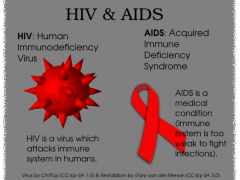 On Nov 20, the Joint United Nations Programme on HIV/AIDS (UNAIDS) Executive Director Michel Sidibé announced the main findings published in the latest AIDS report. Encouragingly, the number of adults and children worldwide acquiring HIV infection in 2011 was 20% lower than in 2001. Noticeably, AIDS-related deaths have decreased by ⅓ in Sub-Saharan Africa (the region which suffers AIDS the most) for the last six years. Are we reasonably close to the end of AIDS world over?

All this sounds definitely promising. Fewer people die from AIDS-related ailments, fewer babies are born with HIV. Our optimism, however, should not make us forget those 34 million world over living with HIV today. There are still nearly 7 million eligible for therapy but without access to it. Even more disturbing is to know that half of these 34 million are unaware they have HIV. These observations point to the urgent need to work for substantial reductions in HIV infections as well as for better care for those suffering AIDS already.

As a high school pupil in Bulgaria, a friend and I had a youth NGO. We organized campaigns to teach our buddies that AIDS can happen to anyone. Once you’ve been through the very colourful moment of putting a condom on a banana to show how it is done in front of a crowd of high-on-hormones teens, you find it easy to read tedious reports and studies on trends in HIV/AIDS. And when you read a press release by the International AIDS Society (IAS) officially launching its Global Strategy “Towards an HIV Cure”, you just jump to the roof.

Where do we stand?

Let’s quickly go through the current ‘world HIV status’ before addressing the feasibility of “turning the tide together”, as IAS’s president worded it. Today’s widely used anti-retroviral therapies were created back in 1996. They’ve been greatly improved ever since, and significant discounts today bring them within reach of many. What is really striking is the persuasive evidence that HIV-positive people who adhere to their anti-retroviral regimen reduce the risk of passing the virus to sex partners by 96%.

New infections in both adults and children are on the decline globally, yet some regions remain a serious cause for concern. In a stark contrast to the worldwide trend, new infections have been on the rise since the late 2000s in Eastern Europe and Central Asia. Even more worryingly, the Middle East and North Africa have observed a leap of more than 35% in the number of people newly infected with HIV since 2001.

As many national epidemics policies have vitally changed in recent years, the number of deaths from AIDS-related causes has declined. Importantly, anti-retroviral therapy scale-up in a number of countries has emerged as one of the most important tools for saving lives, evidenced by the 24% drop in AIDS-related deaths in 2011 worldwide.

Mother-to-child transmission has always been among the biggest concerns. It is, encouragingly, also the area where huge progress has been achieved: 330,000 children acquired HIV infection in 2011, which is 24% less than in 2009 (when 430,000 children were infected). This drop constitutes one of the most amazing advance in the domain so far.

AIDS and the city

How do we achieve “zero HIV infections”? Safer individual behaviour is a first, easy-to-recommend step. Behavioural changes are complex, though: they do not only involve knowledge and awareness-motivated choices but are also limited by socio-cultural norms. In many countries, basic sexuality education remains a mere wish. UNAIDS reports that less than 50% of youngsters in countries with a generalized HIV epidemic have proper knowledge about HIV, and the young women ignore how effective condoms can be when it comes to preventing HIV infection.

Among the people particularly at risk are female sex workers, as HIV prevalence is consistently higher among them than among the general population. These women are much more likely to be living with HIV than other women, due in part to their unusually high number of partners. Of course, programs targeting sex workers themselves exist, but they are still unevenly implemented. Campaigns directed at the clients of sex workers are lacking, and this is a critical omission as the clients constitute a large proportion of infected persons in many countries. Thus, it’s not only condom promotion that matters; so, too, does the reduction of demand for unprotected sex.

The situation is even more alarming for people who inject drugs. They are much more likely to get infected with HIV than the general population, and the pattern is consistent regardless of the country you examine. Drug-related transmission is a particularly burdensome issue to address when aiming to lay the foundation for an eventual “zero HIV infection” world. Eastern Europe and Central Asia are two regions with increasing numbers of newly infected people, and national epidemics there are typically driven by drug use-related transmission. Governments in the region continue, however, to overlook the issue; they allocate only 15% of domestic funding to prevention programmes for people who inject drugs.

At this point, you might blame me for ruining your day, but if you read what follows it might actually make your day.

There is a difference between “an end of the HIV pandemic” and “a cure for AIDS”. A prophylaxis drug to reduce the chance of infection was commercialized this summer. Creating a vaccine is thus far out of reach, and to build the facilities for such an endeavour is a Herculean task, not to speak of developing the science needed for it. As pinpointed elsewhere, even if we one day hear of an AIDS vaccine being approved, our struggle with AIDS does not stop but enters a new phase.

Why are normally cautious scientists using the “C-as-in-cure” word then? Because of the audacious “man from Berlin”, I guess. To make a long story short, a physician from Berlin transplanted cells from a person naturally immune to HIV into an HIV-positive patient. Although the HIV-positive patient had already developed, the patient eventually survived and was cured of AIDS. A wide range of approaches are explored by scientists, and two more AIDS patients may be cured soon.

While waiting for the day when AIDS will just be a fact from history books, let’s be responsible for ourselves and for those we love.