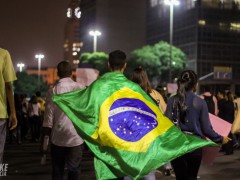 The church bells sound here in Leme, the neighborhood where I live in the south zone of Rio de Janeiro. They’ve been rung three times this afternoon. After the second peal I heard a call for a march. Another march in Rio. Another demonstration for a better Brazil.

It’s weird to hear the church bells like this! Since when has the Church announced protests? I grew up in a Catholic school and as far as I remember the bells were played at times of festivity or prayers, but never to announce a demonstration. I tried to concentrate and realized that the sound of the bells was changing places; they were echoing all over the city, from the beach to the top of the hill, reaching even the slums. No, it was not real church bells, just in fact the sound of them. A popular symbol was being used to attract crowds of people, faithful ones. The call for supporters had left the network  and hit the streets with a series of demonstrations across Brazil. Brazilians opened their eyes and left their sofas.

In Rio de Janeiro, where about 1 million people took the streets according to unofficial sources, the end of the night brought some kind of hangover with it for many. There are lots of unanswered questions echoing in the heads of those who have been struggling for days for a democratic country.

But what has happened in this special protest to leave the protesters so confused?

I was there on the last march, and what did I see? Many protesters together, some more, others less aware of what they were doing there, but everybody occupying one of the main avenues of Rio to express all the indignation and frustration of the people, standing in support of the noble causes of the movement. What causes? A better Brazil, the cost of bus fares slashed, more investment in education, health, infrastructure, and less FIFA WORLD CUP. Wait, less World Cup? Yes! Less World Cup, fewer make up and more Brazil for the Brazilian people.

Everybody was there: students, teachers, fathers, mothers, grandmothers with their grandchildren. And the police were also there. But instead of walking together and protecting the people, the police showed an incredible lack of preparation in how to face such a situation. It wasn’t expected that they would also join the demonstration, but it definitely was expected that they wouldn’t use cowardly strong arm tactics against innocent unarmed people. After all, I will say again, this was a massive crowd of regular perfectly peaceful people. But there were also a small group of bandits and troublemakers who took the manifesto as a perfect opportunity to steal, vandalize, distort and destroy – and give the police the excuse they needed to start using force, and give the protestors one more reason to be afraid and clear off the streets back home to the internet.

The action for a better Brazil started in the social networks and today fills the streets of the country. The social network reaches everyone, from Brazilian troublemakers to the people that fight without violence. Likewise it alerts the well-intentioned people in the movement just as it alerts the bandits and opportunists. So what? Does this weaken the cause? Maybe yes and maybe no.

Maybe yes because many people got confused after the wave of violence. People didn’t know what to do or where to run. Now a movement without leadership gives an opening to opportunists who take advantage of this gap to establish a spearhead that did not exist before. And all this in the context of emerging rumors about an imminent coup.

Maybe no because this won’t have such a negative effect on the protest. All the violence shown in the last hours of the march, traditional media manipulation, all the cold answers of politicians who insist on not hearing what the Brazilian people are saying and who pretend to support the movement in order to better muffle it – all these factors can have a strong positive effect. They give the cause more momentum as they give people more reasons to be strong and keep going on.

These two sides and the issues they pose are now what is uppermost in the minds of the people of Brazil. This is clearly shown through internet posts, street posters and events that have started popping up all over Brazil. I don’t know yet where it is going to go, but I’m certain that it will be leading to some better place: because Brazilian people have woken up.

On Thursday, before all the turmoil, protesters poured abuse on the governor and the mayor of the city. I saw a grandmother at the demonstration with her two grandchildren who asked her to “translate” what people were shouting, and she said they were shouting something like: “stink like a vulture”.

What great creativity and irreverence in that grandmother who wanted to soften the hard words for the little children and accidentally (or not) spelt out exactly what’s happening here.

The problem is that tomorrow these children will grow up and their grandma won’t be around anymore to reassure them. And what will they then shout to the world? After all the years of silence, the protests in Brazil are growing bigger with each passing day,  something has changed and we won’t go back and we won’t stop!