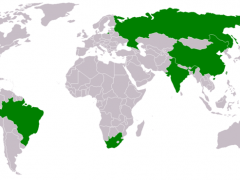 Berlin/Rio de Janeiro, 15 October 2012. Contrary to the forecasts of success in recent years, the ‘BRICS’ (Brazil, Russia, India, China and South Africa) are greatly in need of reform in key political areas. At the same time, their political systems often lack the capacity to reform, which is jeopardising future growth potential. A large-scale international comparative study by the German Bertelsmann Stiftung also comes to the same conclusion.

The urgency of the problem and the capacities for reform vary significantly between the five countries. By comparison, Brazil has the most promising future prospects. Here, major reforms, for example in the fight against poverty and social inequality, were recently implemented. Nevertheless, the socially unjust education system remains a heavy burden for the country’s future prospects. According to the study’s experts, Brazil has made ongoing efforts to strengthen its institutional requirements for good governance and bring them in line with international standards.

The BRICS countries. Photo taken from Wikimedia Commons. It has been released into the public domain by its author, João Felipe C.S.

South Africa recently succeeded in improving the reform capacity of strategic policy planning. However, shortfalls in implementing policies are having a negative impact, particularly in the areas of education and the labour market.

India’s demographic development may well be promising from an economic perspective, but growth prospects are being compromised by enormous regional and social imbalances, for example in the education and health sectors, and by an inadequate infrastructure. The institutional capacities for good governance are similar to those in Brazil, at national level. However, there are large deficiencies at sub-national level, not least in the fight against corruption.

The result for China is ambivalent. A continuation of the growth trend depends on whether the country manages to get to grips with its problems of demography, social inequality and increasing pollution. Here, the study reveals limits to the centralistic political accountability.

The worst-performing country in the comparative study is Russia, with clear deficiencies in the government’s strategy, coordination and implementation capacities. Furthermore, a unilateral economic strategy, patronage and the lack of involvement of civil society are hindering the country’s sustainable development.

According to Aart De Geus, Chairman of the Bertelsmann Stiftung, “Against this backdrop, it seems doubtful whether some of the BRICS countries will manage to live up to their development prospects in future. Even if the enormous growth rates in these countries continue to remain high, economic growth alone will not overcome the tremendous challenges. The BRICS countries should therefore focus their efforts more than ever on political, social and economic reforms in their countries”.