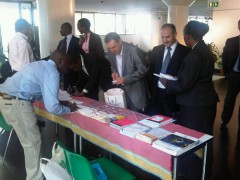 This is the second post in a the three-part series of articles looking at the Future Day held recently in Nairobi and organized by Future Challenges, SID East Africa and the Rockefeller Foundation. Check out the first post here . On this article I look at the security situation in the region and whether it is an issue which could accelerate the integration of East Africa Community or delay it.

Everyone who came for the the Future Day event met two guards at the gate. They all got frisked by those guards; the body, bags, handbags, just to be sure that nobody was bringing in weapons or explosives. This has become the order of the day everywhere in Kenya, and probably in Uganda as well.

All the delegates from other countries like Burundi, Rwanda and Tanzania seemed to understand why that had to be done. But how did we get to the point where security matters more than personal privacy to us as citizens? It started way back when, in the year 2006, the Islamic Courts Union, an umbrella organisation of local sharia courts, took over Mogadishu after heavy fighting with warlords in Somalia. It became an alternative to the Transitional government. Later that year, troops from Ethiopia intervened against the Islamic Courts in an effort to prop up the Somalia Transitional Government. The Ethiopian Forces drove away the Islamic Courts, but that movement’s youth military wing would remain. It would later come to be known as  Al-Shabab.

Kenyans and Ugandans have borne the wrath of Al-Shabab in many ways, something which has forced Ugandan and Kenyan leaders to unite in the quest to drive Al-Shabab out of the region. In July 2010, Al-Shabab claimed responsibility for bombings in Kampala, Uganda that killed 76 people. They had initially warned Ugandan leaders that they would retaliate if Uganda contributed troops to the African Union force in Somalia. On the Kenyan side, Al-Shabab carried out a number of attacks, but the Government resisted the call to fight them until in October 2011 when Al-Shabab militants kidnapped several foreign tourists and aid workers inside Kenya. Kenyan troops crossed the Kenyan Somalia border in the pursuit of the militants; that is how Operation Linda Inchi (Protect the Country- codename for a coordinated military operation between the Somalian and Kenyan military) started.

Since Operation Linda Inchi, Al-Shabab has led attack after attack on civilians in Kenya, especially at the Kenya-Somalia border and  in Nairobi. Kenya is home to many ethnic Somali tribespeople who live in the northern part of the country and in a part of Nairobi called Eastleigh, and the discussion in and out of Parliament after Kenyan forces moved into Somalia to fight Al-Shabab was whether or not it might have been better to begin operating within Kenya first. At the time, the late Internal Security Assistant Minister Orwa Ojode referred to Al-Shabab as a big animal with its head in Eastleigh and its tail in Somalia.

The most visible effect of this conflict is increased tension between Kenyan Muslims and Christians. At the moment, Kenya is a divided country; many believe that Kenyans Muslims (especially those of Somali origin) are sympathetic to Al-Shabab. Progress in East African integration will be difficult so long as this tension persists; Tanzania has a huge number of people of Muslim faith, and many suspect that the problems in Kenya might boil over to include them. This will need to be resolved if East Africa is to move on as one integrated community.

Then there is the question of how the different military cultures within East Africa member states will be harmonized. The Ugandan and Rwandan militaries are often accused of meddling in the affairs of the Democratic Republic of Congo. A new U.N. report released in early November accuses the Rwandan military of commanding and supporting rebel forces in eastern Congo. The same report  also charges that the brother of Uganda’s President Yoweri Museveni actively backs the M23 movement. These are some of things that worry Kenyans and Tanzanians who would love to see a more peaceful and stable region. If the people of Congo were to stop fighting  and become a united country, many people in Kenya believe that the country would be a valuable addition to the larger East African Community.

At the same time, many Kenyans and Ugandans watching the Congo conflict worry that the same might happen in their countries in the context of the recent oil discoveries. Not long ago, Kenyan leading newspaper Daily Nation asked on its leading headline whether the discovery of oil in Kenya would be a curse or a blessing; one case-study they examined is the ongoing war in Congo. Even the World Bank added their voice on the same theme with this blog post.

Many delegates at Future Day noted that the problem of security in the region goes beyond the physical security and the threats by the Al-Shabab. Top of mind is food security, but as the people in the region become more connected through mobile phones, cybersecurity is slowly becoming a challenge as well.

The small group discussions were the best part of the Future Day. Prior to those discussions, most problems were blamed on the government; food security was no different. But the participants changed their tone after the discussions. Suddenly it was all about individuals taking responsibility for most things, including the environment and food security. With smart planning, the region could produce enough food to feed the entire continent. The region boasts the second largest  freshwater lake in the world, and there are numerous rivers across the entire East Africa region. It defies logic that in such a plentiful region famines strike every two years.

Finally the rapid adoption of mobile phones and the  success of mobile money in Kenya and Tanzania have brought  the issue of cybersecurity to the fore. The Communication Commission of Kenya, in partnership with mobile network operators, recently switched off around 1.5 million fake mobile phones in Kenya. The following is part of their explanation of why it was done:

“Mobile phones have been among the tools that terrorists use to remotely detonate explosives, by calling or texting the handsets, or calling their counterparts to allay instructions.

This is not an issue in Kenya alone. At the moment both Uganda and Tanzania are looking at a better way of going about it.

From above, it looks as though the region has a lot to address before even thinking about integration. All is not lost, however. As  noted by Michael Ager, 22, Kenya:

“My greatest hope: A region where people are united within common borders by a shared identity, without the stifling hierarchy of ethnics or racial differences”.

Stay tuned for the final article which will be addressing the issue of ecology and environment.