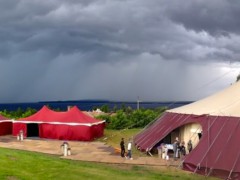 The bottom line reached on Day Two of the Tällberg Forum in Sweden was that if only we could arrive at some kind of agreement about how to define or operationalize globalization, if only we could reach a consensus about its framework conditions and a shared understanding of its opportunities, risks or quite simply of its consequences, this would make the whole theme seem much less overwhelming. At the end of the day we have to ask whether in the light of globalization the whole construct of the national state hasn’t become obsolete.

Is there a positive version of the future then? Big data is one buzzword now doing the rounds of the media. From Quantified Self, Facebook, Google, and NSA to the measurement of even larger aggregates, data collection now seems to be one promising alternative for dealing with complexity. Recognizing patterns in data and using them as a basis for decision-making seems to be one of the positive perspectives on the future. Yet today’s sessions have once more made it very clear that it’s the comprehensive view of both data and the personal stories that cluster around data that makes analysis complete and motivates people to engage and change their behavior.