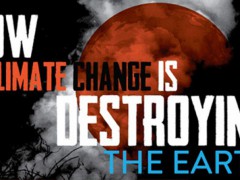 This is a guest post by the team of learnstuff.com. The article has originally been published here.

Thanks to extensive research and noticeable changes in weather and storm prevalence, it’s getting harder to turn a blind eye to the reality of climate change. Since the Industrial Age spurred the increasing usage of fossil fuels for energy production, the weather has been warming slowly. In fact, since 1880, the temperature of the earth has increased by 1 degree Celsius.

Although 72% of media outlets report on global warming with a skeptical air, the overwhelming majority of scientists believe that the extreme weather of the last decade is at least partially caused by global warming. Some examples of climate calamities caused partly by global warming include:

These storms, droughts, and floods are causing death and economic issues for people all over the world – many of whom cannot afford to rebuild their lives from the ground up after being wiped out by a tsunami or other disaster.

Evidence also indicates that the face of the Earth is changing because of warming trends. The ice caps of the Arctic are noticeably shrinking, the ice cap of Mt. Kilimanjaro alone has shrunk by 85% in the last hundred years, and the sea levels are rising at the rate of about 3 millimeters per year because of all the melting ice. Climate change is also affecting wildlife – for instance, Arctic polar bears are at risk of losing their environment; the Golden Toad has gone extinct; and the most adaptable species are evolving into new versions capable of withstanding warmer water.

Despite some naysayers with alternative theories about why global temperatures are rising – including the idea that the earth goes through natural temperature cycles every few millennia – the dramatic changes in the earth’s atmospheric makeup suggests humans are to blame. In fact, 97% of scientists agree humans are responsible for climate change. Since the Industrial Revolution, carbon dioxide levels increased 38% because of humans, methane levels have increased 148%, nitrous oxide is up 15% – and the list goes on and on, all because of human-instigated production, manufacturing, and organizations and individuals work hard to promote an Earth-friendly existence, resistance to change is rampant and actions are slow. For instance, while the US Environmental Protection Agency is still working on collecting data to support development of greenhouse gas reduction expectations for businesses, most of their efforts feel more like pre-research than actual change. Other countries have made efforts – such as signing to Kyoto Protocol to reduce their 1990 emission levels by 18% by 2020 – but the only solution will require the whole world band together.

Steps anyone can take to reduce global warming include:

Check out the infographic below to see what else the changing climate is affecting.