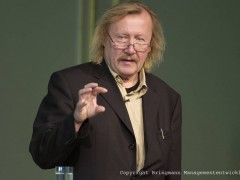 Almost a year ago the fourth “Ulmer Denkanstöße” took place in the beautiful round Richard Maier townhouse in Ulm, southern Germany, and had the honor to announce the philosopher Peter Sloterdijk as first keynote speaker. As we walk into the building we see people everywhere – although it is still an hour to go until the start of the welcome speech. We learn that the hall with its 320 seats is completely sold out and that there are two more halls in the city that transmit the event live on screens. Peter Sloterdijk is a well-known name in modern philosophy and especially important in Germany.

His work has a vast range of topics (on the absolute and the aesthetic of the Eurotaoisms, God’s zeal and capitalism to anger banks and cynicism) and as experts say has a stylistic brilliance that was not seen since Friedrich Nietzsche’s spheres of thought. And then – after a warm welcome – there he is. He moves slowly to the stage, sits between water bottles and a big screen, smiling mischievously, underlines the signal effects of his sentences with his right hand, twirls his mustache in thought and shakes up the history of humanity with his essayistic monologue as en passant.

The topic is set to be about “we and I” (and as we know it from philosophers he corrects the topic: “if we had more time, I could explain why we cannot only talk about we and I but need to involve the you into the discussion – but that’s another session”) and he starts off by saying that a scandal triggers some sort of “synchronous stress” in the “problem communities” and that this is always a feast for the sociologist, in times of the “artificial worries Club” named Germany. He speaks thoughtful and attentive – enjoys when the audience laughs but calls them out on the same time. After talking about family, the Bible and Karl Valentin he slowly approaches the topic by saying that before concentrating on the “we” and its implication of “together” it is elementary to understand the two distraction myths first. There is the biblical that can be found in the Holy Scripture (Gen 11, 6-7) “The Lord said, “If as one people speaking the same language they have begun to do this, then nothing they plan to do will be impossible for them. Come, let us go down and confuse their language so they will not understand each other.”” People agreed on everything and were therefore a threat for the lord in respect of approaching him in his proper sphere. “God apparently has something against the consensus” says Sloterdijk and makes everyone chuckle. The second modern myth is more geographically. All homo sapiens come from Africa, most of them left the continent but the entire history of evolution is unified in each of them/us. So the period of time we nowadays call history is the time we started to reunite as society. But what is society? It was the French sociologist Gabriel Tarde that asked himself how it was possible that people actually had so many similarities with each other. The answer for him was imitative infection since he defined sociology with similarity science. Sloterdijk gives an easy current example while he sits up and looks down on himself. “Fashion for example. One person wears a fancy hat – and after a while we all wear it.” It is the supposed mental proximity and human accessibility that make him come across sympathetically in his essays, speeches as well as in the very successful German TV show “Das philosophische Quartett”.

But after that long introduction he looks at the clock and says that he finally needs to get to the topic by enumerating eight strong reasons for being together. The first motive lies in human natality or premature birth. “I need to start with the simplest reasons because they usually are the most difficult to understand.” he claims. Animals are born and human beings come into the world – the differentiation is important. The human is not complete and is always too early. This is characterized by our inability to speak a language and to walk upright.

The second motive infers from the human capability to emphasize with somebody. This is strongly connected to the third which conveys that people are a species that always lives together in systems of common immunity. The fourth motive talks about circulation spaces for giving and Sloterdijk argues that the desire to give is human and an indication that we want to be perceived. The speaker looks around the hall and observes gingerly that even if human beings make gifts (not necessarily materialistic gifts) they still want something in return. The audience smiles as if every single one of them understands what he is talking about. The fifth reason for being together is also really simple, he says. Society is a synchronous stress club which is based on the assumption that if we hadn’t any worries or problems we’d just invent or provoke them. As a result of gossiping, which is supposed to be the highest percentage in modern communication, synchronous stress is generated. The more modern the society the more it lives on scandal. “That at least is my thesis” Sloterdijk ads after a little pause. This also affects motive number six: A common enemy unites. That one we know. In this context the reference on culture and stability through coherence is further a reason for the together of society in terms of emotionality. As an example he names Christianity – in contrary to nation states which are already satisfied if they last longer than 15 generations. As a last motive he refers to the fact that humans are hearing creatures – even prenatal. The perception of hearing therefore enables cultural bonding in the first place which is one of the fundamental reasons for social stability and cohesion. Sloterdijk all of a sudden looks up to the audience and it becomes obvious that the 1,5 hours he was supposed to speak are already over. I feel that I strongly conceive to listen to more of what he has to say and make him stay a little longer. Every aspect of his speech was just a scratch at the surface and doesn’t really satisfy me. But as he returns to his seat amid loud applause I remember the title of the event: “Denkanstöße” which means food for thought. And that is what we got – neither more nor less – but from an exceptional keen thinker of our time.

Elisa Voggenberger, currently on a research stay at Stanford University, is studying Communication and Cultural Management and an additional minor in Corporate Management and Economics at Zeppelin University. She was born in Italy and grew up near Milan. She moved back to Germany and successfully completed her Abitur (high school diploma). During her school career she was not only director of her school theater group but also screenwriter of several representations and filmlets.  In her spare time she attended the regional school of arts. When not occupied in diverse projects she loves to travel the world and to visit museums; Elisa performed several art- and theatre projects in Germany and Europe.