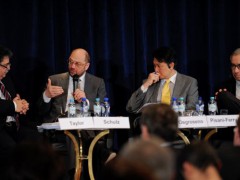 Martin Schulz, President of the European Parliament, attempts to speak at the Brussels Think Tank Forum. The microphone fails, he is unfazed. “This must be Angela Merkel,” he jokes, she wouldn’t want his message to get out.

You have probably never heard of Mr Schulz. That’s too bad because he’s the most powerful man in the EU institutions who has a direct democratic mandate. And, to boot, unlike most Brussels pols and functionaries, he’s not afraid to stoke controversy. Schulz first came to international prominence in 2003 when, as the head of the German Socialist delegation of the Parliament, he managed so provoke Silvio Berlusconi that the Italian premier ironically compared him to a Nazi concentration camp guard…

Since he became the EU Parliament’s President last month, he’s been rather slow to adopt that office’s more diplomatic, consensual style. His predecessor, former Polish Prime Minister Jerzy Buzek, was more typical, careful to offend no one, remarkable for his office’s incredibly prolific production of inoffensive press releases.

Schulz’s style is more confrontational, his rhetoric appears more frank. He reported that his attending of the European Council summit earlier this week, which finalized a new Treaty on fiscal discipline, was “a typical Brussels meeting”. This, for anyone who knows EU affairs, is not high praise.  This could mean the discussions were painfully verbose, so abstract as to be totally detached from day-to-day life, and conclusively inconclusive. The pro-EU Financial Times recently described the deals that tend to emerge from such talks saying:

[They] tend to be full of legal loopholes and vague commitments – that are then easily picked apart and reneged upon, once national governments leave the conference chamber and return home.

Nevertheless, Schulz was optimistic. When asked by your humble blogger if Merkel might accept a change in policy to end the euro crisis, either European Central Bank (ECB) intervention or Eurobonds, he said “I hope that in three months’ time we will get Eurobonds.”

This is a remarkable “hope” given the tremendous fear and opposition of German officials and politicians to being liable for other countries’ debt. However, Schulz is well-placed to make such a prediction as he regularly speaks with Merkel by telephone and is a connoisseur of German politics. He points out, Merkel has often rejected things in the past – bailing out the Greeks and treaty change – before reversing her position once it becomes untenable.

Three months, “That is the time Merkel takes to change,” Schulz said. He readily admits the German Chancellor is in a difficult position due to her unwieldy governing coalition but he insists she “has to take a chance” and “use her authority” to end the crisis.

The Brussels diplo-bureaucratic machine is remorselessly geared towards elaborating policy without politics, defending consensus whether or not it actually exists. If European politics needs one thing, it is to actually be politicized. You can’t have big decisions – about taxes, employment and budgets – without open debate and controversy. If Schulz, in his style and substance, can inject some of this into Brussels bubble, he will have taken a big step towards the legitimation of the EU.