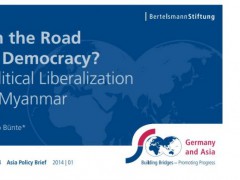 Myanmar’s liberalizing reforms initiated by President Thein Sein after taking office in March 2011 are raising high hopes of peace and democracy in the country. Progress, after nearly three years, has however been uneven: there have been positive developments in the area of press freedom, with regard to political prisoners and in dealing with the political opposition. At the same time the dialogue with ethnic groups has stagnated and ethnic and religious violence has escalated. This Asia Policy Brief critically assesses the reform policy and weighs up the chances of democratization of the long-time military regime.

In the latest issue of the Asia-Policy-Brief,  Marco Bünte – Senior Lecturer and Head of Research at the School of Arts and Social Studies at Monash University in Kuala Lumpur – analyzes the political reforms with special regards to new liberties and the role of the military in times of change.  Is Myanmar heading in the right direction after the Burmese Spring or are the doubts in President Thein Sein’s political reforms justified? Bünte says that the progress of Myanmar’s further democratization depends on different factors: The role of the military and their representation in Parliament, the introduction of a federal system and  Aung San Suu Kyi’s possible presidency. However, the whole Policy Brief can be downloaded here – you will also find previous issues of the “Asia-Policy-Brief”.