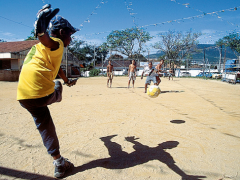 Today, Brazil is the world’s six-largest economic power and seen by many countries in Latin America and elsewhere as a model for development. The country has a high capacity for sustainable development due to, among other factors, its enormous natural resources, economic boom and cultural diversity. The Sustainable Governance Indicators (SGI) BRICS report on Brazil makes a similar assessment when examining the country’s governance and policymaking: “An evaluation of Brazil’s governance shows remarkable achievements concerning the state of democracy, policy performance and the government’s management capacities. It also reveals a continued upward trend in these dimensions.” However, the report also highlights that this development depends on the good management of the country when stating that “there are severe weaknesses in terms of the quality of the government’s steering capability”.

One of the much acclaimed achievements of the Brazilian government are the programs against poverty. Thanks to “Brasil sem miséria” (Brazil without poverty) some 28 million Brazilians have come out of absolutely poverty. However, in my opinion, the government has thus far not made any real advances in the sector that is most relevant for the extermination of poverty: education. The SGI report confirms that the modernization in the sectors research, innovation and education is slow in Brazil often because short-term politics dominate long-term interests.

It’s true that education in Brazil has improved in the past decade. In the OECD Program for International Student Assessment (PISA) Brazil moved from last place in 2000 to position 53 of 65 countries in 2009. But this ranking still means that the country does not meet the “Education for All Goals” of UNESCO in 2015. The problems of the Brazilian system begin in the early years of childhood education and from there keep on growing – like cake batter in a hot oven – until university. The SGI report on Brazil correctly states that “the educational system does not yield the skilled labor force the country needs and the problems start many times with basic education.”

In the last years, Brazil has set up a number of programs to improve the quality of education and has increased the investment in this sector from 4 per cent of GDP in 2000 to 5,2 per cent of GDP in 2009. So, partly, Brazilian education policy delivers today good and equitable education, as the SGI report argues. But in my opinion, this is true only because of the recent government expenditure, and only when looking at large cities such Rio de Janeiro and São Paulo. In the upcountry the situation looks extremely different. There, I believe, the government’s education policy has largely failed. In addition to the lack of teaching materials, low salaries for teachers and precarious study conditions, most upcountry students face problems in simply getting to school. There is bad or no transportation at all, the distances between homes and schools are large and many students also have to work in order to ensure the survival of their families.

Moreover, in addition to the differences between cities and countryside, the Brazilian education system is also divided between the private and the public sector. I had the opportunity to experience both systems. As a student, I went to a great university, but just because the bases of my education were laid in good private schools – thanks to my parents who were able to afford the fees. As a teacher, I now work in remote communities and experience the reality of the public education system there. Believe me: The official numbers which apparently prove the success of the government’s policies do not reflect the truth. In Brazil, a good school is still synonymous with an expensive school.

Most public primary schools still lack quality education and it’s not guaranteed that pupils learn there how to read and write properly. The reason for this is also that in many public schools there exists a policy of automatic approval which prevents students from failing an academic year. Teachers are forced to approve students for the next year even if they didn’t perform well academically. Thus, students do not have to study for anything beyond the minimal grade because the minimal grade is all that’s necessary to get approval for the next year. Thereby, students are pushed all the way till college where they often fail the entry exams and secure a place only through a quota for public school students.

It’s All About Numbers

But how can all these quota students graduate from university if they do not have the same qualifications as their colleagues from private schools? The answer is that they cannot, unless one lowers the academic standards. And that is exactly what is happening in Brazil today. But what is the advantage of more people graduating with ever lower levels of qualification? The answer: Numbers! The government can show the world how well the country is developing. What the numbers do not show is the qualification of the students and graduates.

A good quality education is an important element for sustainable development. Fortunately, Brazil keeps moving forward, but the country must leave the old engine aside and start investing in faster transportation to get somewhere.

A cooperation between Future Challenges and SGI.