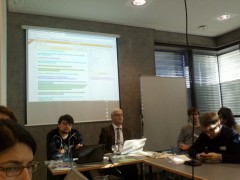 The topic of this session was rather broad and in an area which is already widely discussed by political and social scientists on the one hand and the official elements of democracies, the people “the demos” and the “sovereign” the state, on the other.

What I really liked about the discussion is that it started with a “collaborating” moment – the barcamp at its very best. During session planning Prof. Pernice, one of the founders of the Institute for the Internet and Society, and the well-known German blogger Michael Seemann (@mspro) (see one of his blogs at www.ctrl-verlust.de – verlust meaning loss of control) proposed similar topics and decided on the spot to give the session together. While the professor took a rather academic approach, the blogger put forward more provocative questions: Can democracy be saved from the internet? Does democracy have a future? Are we experiencing the end of democracy through the internet?

Prof. Pernice opened the discussion by making a wide-ranging review of the risks and opportunities for democracy brought by the internet with reference to such categories as the national and global level.

I thought it interesting that the blogger contrasted this view of dividing people and communities by nationality by bringing forward the concept of  Benedicts Anderson’s “Imagined communities”. This was introduced by Anderson in 1983 in the book of the same name – actually way before the advent of the internet as a popular communication tool. With the internet “borderless communities of interest” actually gain momentum – Seemann described it as a parallel world where actual opinion is built and discussions take place.

In a way he is right – being a German national doesn’t mean that I can identify with other German nationals. Perhaps in terms of my opinions and values I have more in common with a protester on Tahrir square – even though we don’t share a “common living reality” – than with my German next door neighbor. What we might share is “a common reality of thinking”.

The problem of organizing political processes arises when people within state borders are not thought to be the “demos” anymore. The internet and the building of different “communities of interests” will be a great challenge for regulation and the constitutional state. Will there be constitutional states in the future or will there be world citizens, a world government?

Michael Seemann was laid back about this saying “Facebook will die eventually”. And one participant asked why the internet should necessarily improve democracy? I agree. After all, real change comes from the people, technology might enable this, but cannot do it alone.

Perhaps we have to do it the other way around though as Michael Seemann suggests: Why don’t we first ask and analyze “how we communicate today?” and then “develop a political system which fits the current communication culture?”

After all politics is communication!