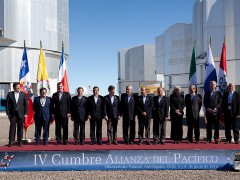 They come by it honestly. Much like their European relatives, Latin American leaders have a sweet tooth for the summit, the annual meeting and the commission. Lofty goals and promises of solidarity are sealed with vigorous handshakes, bear hugs and kisses on the cheek. But beyond the ubiquitous photos of smiling presidents, few concrete achievements emerge from these gatherings.

This could be changing.

The Pacific Alliance, formed in 2011 and composed of Mexico, Colombia, Peru and Chile, held a seventh round of high-level meetings on May 23 in Cali, Colombia. The four countries announced a trade agreement covering 90 percent of their commerce before turning their attention to labor, services and financial integration. The four have adopted an “early harvest” approach, accepting progress in stages rather than holding out for a single, comprehensive deal. Chile, Colombia and Peru have already aligned their stock markets through the Mercado Integrado Latinoamericano (MILA) – an example of incremental yet tangible accomplishments that have long eluded Latin America.

The Pacific Alliance is based on common goals, perspectives and approaches, not simply on regional solidarity. Members have built upon political and macroeconomic stability to carve out a niche in the global economy, welcoming free trade to the east, north and west, even as the world threatens to break into separate trading blocs. While avoiding confrontation with more statist neighbors, they have quietly pursued a liberal agenda. In the last week, Chilean Abassador Felipe Bulnes has repeadily underscored the notion that the Alliance is non-exclusionary- Brazil would be welcome to join, should it meet the criteria.

All have adopted strategies informed by East Asian success—and for good reason. If Latin America’s west coast were a global backyard during the American century, it could well be center stage in a Pacific century. Agile and ambitious, Alliance members are poised to pounce on this opportunity.

They are the “Pacific Pumas”, and together they offer an emerging model for emerging markets.

Intercontinental FTAs hog the headlines, but inter-Alliance agreements could underpin Puma emergence. As a bloc, the Alliance offers Chile and Peru access to a massive market that dwarfs domestic capabilities. For Mexico, easy access to Andean commodities could generate new Puma supply chains. Bankers on Wall Street and bureaucrats in Brasilia have noticed: As a group, the Pumas draw attention and influence that they would struggle to establish individually.

Of course, the Pumas face growing pains, and recent gains could easily be swept away with the Pacific tide. From urban shanties looming over Juarez to isolated rural communities along the Straights of Magellan, bare feet and callused hands do not square with heady growth figures. The optimism in Mexico City may not be felt in Chiapas. The Pumas’ ability to develop an internal consumptive motor hinges upon increasing the buying power of the less well heeled (and of the barefooted).

Many traps remain. In Mexico and Colombia, insecurity discourages investment and hinders development. Natural-resource reliance puts Chile and Peru at the mercy of Chinese growth and fickle commodities markets.

Nevertheless, Puma momentum is real, and the timing could not be more propitious. As the US and Europe pivot to the east, and as emerging Asia pivots up the development tables, the Pacific Pumas occupy prime real estate in a reconfigured global economic ecosystem. Success breeds influence: Panama and Uruguay observed the Cali meetings, while Costa Rica officially joined the Alliance. Perhaps the region is finally ready to run with the tigers of the East.

This post contains excerpts of a longer piece by the author published in the Financial Times. See the full article here.