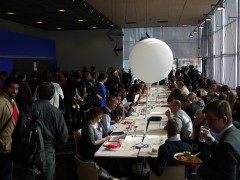 The first session after the opening plenary was a blockbuster with representatives from 17-18 countries sharing the latest state of openness in their countries. The representatives were a mix of public officials, open data activists, NGO officials and citizens. Each had just 2 minutes to present a snapshot of the current state of open initiatives and achievements in their country. The practicality of the time limit created an energy around the global view of openness, as representatives tried to present their concerns and achievements in that small window of time.

Let me go back a bit before I present you the snapshot. Openness in this conversation was measured in terms of a few parameters, and I believe I should first tell you what they are.

1. Translation of ‘open’ data – What exactly does it mean to have ‘open’ data? OKFN has a excellent exposition on the same here. Data is open if it is available freely, without legal restrictions, is reproducible and reusable, is available in its raw form and is technologically open – which might entail it to be machine-readable. Neither should it require proprietary tools for access. All these conditions are imperative to kick-start open governance. Let me illustrate with an example.

An activist in Israel talked about how ‘the black hole of legislation’ was dumping the ‘open’ data in unusable physical format in government files. The activist decided to scan all the pages and put it online and rallied a community to process it and make the data usable. Within 2 days, the government responded with an open data portal itself.
Here, even when the government had in theory made the data ‘open’, it was not available nor was it in a friendly format. The activist’s actions were geared towards making this open data available. The next process was of making the data ‘useful’. A PDF document is not useful, a spreadsheet is. So useful here means the ability of the file to be readily analysed and understood by either a human or an algorithm.

Much of the dialogue in the festival was centered around these three technical issues of open data – legally open, socially open and technologically open.

1. Open Government Partnership (OGP) participation – OGP participation entails a government to accept and implement an open government declaration; deliver a country action plan developed with public consultation; and commit to independent reporting on their progress going forward. 57 countries have participated in this initiative so far. Some countries are arguably doing more in this direction that others; notably Norway & UK. While some, like India, have chosen to walk away from participation. (India pulled out, apparently because of its discomfort with ‘independent review mechanism that might have ‘outsiders’ assessing the government’s progress.’ And even worse, as the South African representative pointed out, the secrecy bill of South Africa is a regression in the face of its OGP participation.

3. Community participation – The first two factors were about the supply of ‘open data’. The third factor is about the ‘demand’ for open data. What would a citizen do even if one day he/she has access to all public data in a usable format? Why would he be motivated to use it? This I believe is the biggest question that needs answering and that perhaps wasn’t dealt with adequately in the festival. Firstly, the transformative power of open data needs to be understood by the general public. Right now, the trigger for demand for transparency stems from a need for accountability: The corruption scandals, government excesses, inefficiencies and so on are the triggers that lead common people to demand to open governments. Yet accountability shouldn’t be the only motive. (In another context, Pasi Sahlberg of Finland makes an amazing statement. He says, “There’s no word for accountability in Finnish, accountability is something that is left when responsibility has been subtracted.”) The potential of entrepreneurship that open data can unlock is tremendous, so is its potential in improving life standards, as well as cost savings (Beth Noveck in her Ted talk quoted that,“Sberbank, the largest and oldest bank in Russia, largely owned by the Russian government, has started practicing crowdsourcing, engaging its employees and citizens in the public in developing innovations. Last year they saved a billion dollars, 30 billion rubles, from open innovation, and they’re pushing radically the extension of crowdsourcing, not only from banking, but into the public sector.”)

The representative from Ireland gave an excellent example of an open innovations platform for the city of Dublin, called Dunlinked. The open innovation event attracts substantial number of entrepreneurs (40% of the total attendees) and it has so far resulted in creation of 27 apps.

The promise of Open extends beyond retribution and policy clarity. I am hoping that the next edition of the Open Knowledge Festival will have a stronger emphasis on creating this demand for openness with an appreciation of the potential of “open” among laypeople. 17 presentations between you and the lunch" - Aalto's converted cafetaria

Globally, the open movement is in its nascent stage. There’s a basic need of awareness about the open standards and benefits thereof not just among the governed but the governing bodies too. While some countries still do not give out public datasets, some have issues of exorbitant fees being charged for a given dataset and some other have licensing and format issues. Here’s a lowdown.

Uruguay – Initiated use of open tools.

Italy – 3085 datasets have been “liberated” in Italy as of now. The representative felt that they have the data, but a clear strategy is missing to utilize this data fruitfully. Collaborations with the private sector are also noticeably absent.

Nigeria – The representative expressed the exasperation in obtaining data in Nigeria. But even in the face of a non-empathetic government, the efforts by the team have yielded some stunning revelations. yourBudgit is a project that visualizes government spending. The powerful oil companies’ influence is being documented as well.

UK – The UK representative talked about the recently launched government’s open data portal that has nearly 2 million visitors till now. It has 8691 datasets and going strong. Farida Vis had earlier given 2 stunning examples of open data usage.

Slovakia – Slovakia launched its open data portal, and the datasets are standardized with ckan. Unfortunately, there are just 20 datasets on the portal even after 9 months of launch. Also the issue of licensing is unresolved as there are no explicit public licenses used for these datasets.

Argentina – Argentina is not an OGP participant, although the city of Buenos Aires has done some interesting work towards open governance. The ‘ministry of modernisation’ has started the ‘Buenos Aires data’ which offers requisite public datasets in usable formats. It organizes hackathons, visualization marathons, apps competitions, a digital cities event and, thus, spurs a culture of open innovation.

The neighboring Chile, Columbia, Peru are OGP participants and the process of creation of open data portals in each country has been initiated.

Brazil – Brazil is one of the 8 founding governments who endorsed the open government declaration. It is one of the more  progressive nations in the world when it comes to the use of free and open source software.

Kenya – Kenya has witnessed 550 dataset releases. It is among the more active countries in the movement towards open governance. As a matter of fact, it is extending its regional reach and helping neighbours Uganda and South Sudan. Kenya does not have a Freedom of Info (FOI) act. But it is witnessing a host of innovative solutions being thought of and implemented.

France – The representative from France gave an example of a project called ‘nosdeputes.fr’. It is designed as a platform to mediate between citizens and MPs. Through their comments, users are prompted to the debate by sharing their expertise when they feel useful.

South Africa – SA seems to be regressing than getting open with its Secrecy law and recent actions by government such as removing the information about the ‘New order mining rights’ which was open earlier. Also removed was the ‘Water quality data’ which was accessible earlier. Although South Africa is an OGP participant, there’s been little progress towards real openness. The representative gave the example of the ‘environmental information hub’, where no visible progress has yet been made.

On the bright side, there are some datasets that are available. Initiatives such as ‘coding for democracy’ hackathons are spurring developer interest.

Australia – The Freedom of Information act is present in Australia. There has been legislation to ensure openness by default & open standard by default. As always, implementation is still lagging. The representative talked about involved government hacks and initiatives that are being rolled out.

Czech Republic – CZ is a OGP participant. nasstat.cz is the data portal. The representative also talked about a data driven journalism platform that exists. However he lamented that money is not being spent on the initiative by the government. “The NGOs are working for free.”

Netherlands – It released many of its datasets last year, though subsequent newer datasets are being released slowly. Netherlands now has free datasets, which was not the case earlier. The open initiative has suffered under budget cuts, and that poses a problem. However, the government is keenly pushing for free and open license data. Also, for the first time,  open budget would be presented in Netherlands this year.

Canada – Canada is witnessing active movements with cities opening their data. Its 12 point action plan as an OGP participant received citizen’s consultation through online medium. The government has made available 12,000 datasets on data.gc.ca.

Ireland – Ireland recently started going open. I wrote in an earlier post about its Dublinked initiative.

USA – The representative felt that the Federal IT strategy that came out in May was ‘redundant’. The OGP commitments seemed to be a ‘mixed bag’. Though one must note that it was US that set the ball rolling for OGP.

Open Corporations – Chris Taggart talked about a novel initiative that seeks data from corporations around the world. In a survey done by the team in OGP countries about access to global company data, the OGP countries averaged a rating of  21/100: A grade of  ‘E-‘ in Chris’ reckoning. He pointed out that UK, Norway, Belgium and some US states are doing good work in opening corporate data.