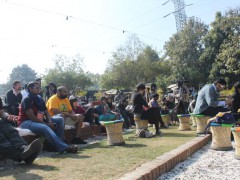 Movement 1: Past – ‘Pickles’
Before speaking of new cultural practices, I would like to share with you an old cultural practice among the people of a village in Bandra, Mumbai. Earlier, women from Gorai would come to Bandra to make pickles for families in Bandra. These pickles were customized according to family preferences. One of the key processes in the making of the pickle was drying it on rooftops under the hot Mumbai sun. This long standing ritual is one of the many small practices that contribute to the local cultural and economic fabric of Bandra – a defining ‘way of life’. However, over the course of years, the ritual has all but vanished. Why?

At the Unbox festival,Busride, an independent design studio, shared an anecdote with us to illustrate how little known facets of life are being destroyed by an un-mindful ‘modernity’. When modernity came to the little community in the shape of high rise buildings, it cast shadows on the predominantly smaller houses. The shadows cast by the high rises made the drying process of pickles difficult and caused the entire industry to shift out of Bandra – ending the pleasures of customized tastes, the shared ritual of pickle-making and a delicious reminder of changing seasons.

I believe nostalgia is a fecund ground for new ideas. Nostalgia is like a musical composition- composed of repeated rituals. The variations, the remixes produce new cultural practices that are rooted in a nostalgic identity.

I would describe Busride’s project of popup restaurants discussed in the workshop as one such delicious variation in the nostalgic symphony of rituals – pickle making. The restaurants ‘pop up’ in old Bandra houses with food cooked by local housewives, served to a small predefined gathering: a new practice that provides a window into the local cuisine of yesterday and today.

There is one thing that sets Unbox apart from most any other gathering of intelligent people. Its emphasis on ‘hands on’ participation allows for true multi- disciplinary projects and outcomes. Let me give you a few examples of what I mean – The Unbox fellowships brought together academic and other practitioners from the UK and India to test the potential of collaborations. Here’s a few of the fellowship ideas:

a. ‘Unbuild’ challenged the prevalent notion of maps and ‘mapping’. Through a (quite obtrusive) camera apparatus, Unbuild made the act of ‘data collection’ much more collaborative and engaging – the resulting product is not a static map but a dynamic and immersive space.

b. Team ‘Unmap’ infused the historically significant spaces in Sirhind, a small town along the Grand Trunk Road (one of the world’s oldest thoroughfares), with surprising ‘life’. With sensors actuating voice-based narratives relating to the decrepid old buildings, it brought the ‘ruins’ into the consciencness of the local people.

c. “Unveil” sought to inform people about the nuances of law-making and good governance through engaging and simplified multimedia. At the event, Unveil invited people to use simple symbols to narrate/ interpret the events and concerns of today. I tried my hand at it and attempted to signify the problem behind the simplistic depiction of Kashmir in popular media.

Other ‘hands on’ projects that I took part in were the screen printing workshop where we created our own T-shirts; infusing vodka with flavours of your making; developing prints the old school way; the MHS workshop where we (mostly Marco) created a prototype single person night shelter with bamboo and a tarpaulin mat and so on. The effect of it all was a feeling of refreshing surprise – a feeling of ‘that wasn’t as difficult as I thought it would be’.

‘Hands On’ demystifies the process of creation. A credo of ‘hands on’ creative practices is sure to encourage experimentation and confidence among people to take a more active part in cultural practices.

In the Indian subcontinent, it is common to see hawkers selling their wares off their bicycles – groceries, knick-knacks, utilities and more & enough to surprise you. It is a part of the daily fabric – a routine that is slowly becoming invisible in major cities. Incidentally, in a bid to de-motorize cities, France is trying to introduce the idea of bicycle commerce. Unfortunately, Indian policymakers and GDP chasers see it as a sign of backwardness. It takes an alien eye to appreciate the beauty and elegance of an age old system. John Thackara and Arjun Mehta created the Velowala project that explores new bicycle-driven  commercial opportunities for an ecosystem that already exists in India! It has potential to further streamline the existing distribution systems of the Indian market.