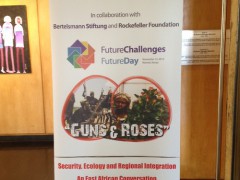 Julius Nyerere, the first Prime Minister of Tanzania (then Tanganyika) is believed to have been the first prominent politician to discuss the idea of East African Integration. In 1960, when he spoke on the subject, the East African countries Kenya, Tanzania and Uganda had not yet gained independence. When they later did achieve independence, the countries’ leaders got together and declared that they would form an East African Federation. Shortly thereafter, senior politicians and public servants gathered to give life to the East African Federation Working Party. Years down the road, we still have not seen any of this foundational work bear fruit.

“Security, Ecology and Integration: a regional conversation” was the theme for the East Africa Future Day that was held on 12th November in Nairobi organized by Future Challenges, SID East Africa and the Rockefeller Foundation. There was a lot of great conversation shared that day. Some of it is captured here and some is not.

There is a youth challenge in East Africa. It is there today and it will be around for years to come. East Africa has one of the youngest populations in the world at the moment. Children made up 45% of East Africa’s population in 2005, and five years later it hovered still at 44%. Uganda, with 48%, is even younger than Kenya and Tanzania.  Looking ahead to 2030, the estimated number of children under 15 in East Africa will be 96 million, which will be 41% of the region’s 237million people.

This youth boom means that any programs and institutions that are put into place must consider young people as a top priority. But one of the ‘solutions’ that emerged from the event was that: young people need to stop looking at the government to solve their issues. The region’s young people today often blame the education system or politicians for high unemployment. But that will not help. Panelist Nanjira Sambuli, New Media Strategist and Consultant, said:

“The reality is: Ain’t nobody going to create jobs for us [youth]. It’s the era of innovation – a Renaissance, if you will.”

The youth need to take on the challenge of being problem solvers. It’s a hard task, but it can be done.

“Does an integrated East Africa respond to our ecological and security challenges?” This was one of the topics handled by one of the panels on this day. And I dare ask: Is anyone secure these days? Security is and continues to be an intense issue that faces all of humanity. Some of the questions and thoughts raised during the East Africa Future Day conversation were critical to mainly East Africa, but the situation is not unique to the region. Security is not just about the borders: it is about the Internet, bio-warfare and outer space. There are already a lot of border conflicts going on in East Africa. Integration means that all of these become ‘our’ problems, not just issues for the individual countries to deal with on their own.

And as two participants noted on Twitter: “Collective security plays a greater role in integration.”

Integration is no mean task. It requires lots of work. Integration for East Africa is like bringing together siblings that have never known each other before. As these siblings meet for the first time, they might need to catch up on lost days and years. There are many things on which they do not see eye to eye. They could look to resolve their issues there and then, or they might instead gradually come to overlook their differences in upbringing and look forward to facing the future together. All of this could take minutes, hours, days or years: or it could last a lifetime.

Unemployment, development, security, customs, poverty, education, hope, citizenship and so many other issues are at the core of East African integration. And the million-dollar question for me, raised on that day is: “What happens when YOUR problems and MY problems become OUR problems?” That, for me, is the central question of integration.

Here you can have a look at the Agenda of the Future Day in Nairobi.

Kennedy Kachwanya: Future Day Part 1 – Hear what they say but pay more attention to what they don’t!