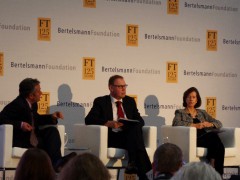 As representatives from around the world arrived in Washington DC for the Spring Meetings of the World Bank and IMF, the Atlantic Council and Bertelsmann Foundation released a report exploring the prospects of a transatlantic free trade agreement (“TAFTA”) between the US and EU, titled “The Transatlantic Trade and Investment Partnership: Ambitious but Achievable”. Described as a “21st Century” trade agreement by Deputy U.S. Trade Representative Mariam Sapiro at the event, the trade agreement (also called “TTIP”) seeks to resolve many of the outstanding trade issues between the US and the EU in order to promote further trade and economic growth. And while the report highlights some of the main topics of disagreement that a potential US-EU treaty would need to solve, it does not consider the outstanding “20th Century” issue with such agreements – the process by which it is negotiated and discussed.

It is the treaty process itself that often self-selects the topics and determines the interests represented. According to the report, intellectual property right protections will “most likely appear in any agreement.” But geographic indicators, a long-recognized intellectual property topic, is separated from the rest of “IPR protections” and rated lower in importance, highlighting the likelihood that IPR will be construed as internet- and tech-focused, and not try to deal with legitimate existing intellectual property issues the EU has with the US — which is notoriously weak in protecting EU geographic indicators like Italy’s Parmigiano-Reggiano and France’s Champagne.

IPR is seen as easy according to respondents in the reports survey (who are “heavily represented” in “Washington, Brussels and Germany”), but public response to the Anti-Counterfeiting Trade Agreement in the EU and elsewhere was strongly against it – highlighting the second now-common failure of the “21st Century” treaty process. If there was one take-away from ACTA’s failure in the EU Parliament, it was that trade agreements should not be end-runs around public input and accountability. But the lesson taken from ACTA by the USTR and the authors of the joint report seem to be that by broadening the scope of topics tackled by the potential trade agreement, controversial topics can somehow be “resolved” without public input. Maybe it will devolve into horse-trading – EU gets geographic indicators protected in the US and the US gets weaker data protection in the EU – who knows. But if the treaty process continues in the footsteps of ACTA and the Trans-Pacific Partnership (TPP), then we know one group of stakeholders who will certainly be out of the loop – the public. Through a new, inclusive, transparent, and accountable treaty process, the US and EU could try to build an agreement that truly befitting the name “21st Century”.

The Challenges of the Eurozone