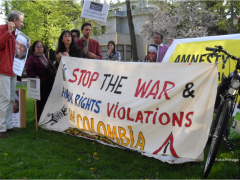 In Latin America one can say that the distance between government elites and the people has been historically large. The term “citizenship” is still a work in process, but the organization of civil society has become stronger over the past decade. Whether this is an outcome of globalization is hard to say, but it has a lot to do with the democratization process throughout the region, and of course with the influence of other civil societies around the world.

Access to key decision-making processes is quite closed to citizens, and most of us are still part of that large group who accept decisions rather than make them. Legitimacy, accountability and transparency are still terms far from being associated with Latin American governments. But some mechanisms to permeate those decisions and their policy development and implementation have at least been proposed as alternatives by national and international civil society organizations.

Transnational advocacy networks (TANs) are a very interesting example of how horizontal interactions throughout the world are slowly playing an ever greater role on the level of global governance. These networks have been useful, for example, in transferring to local organizations knowledge or experience on how to lobby and how to get resources to finance a wide range of civil campaigns.

They have also developed strategies to boost their work and make their action more effective by creating issue-based networks or territory-based networks. One interesting example of this is the NGO network on transparency that operates in Colombia (ONG por la transparencia).

In Colombia, most NGOs are engaged in different areas related to the tragic and long lasting national conflict. Some focus their work on strengthening democratic institutions and others are environmentalists. Some work with victims of violence, some with former guerrilleros or paramilitaries, helping them reshape their lives within society. Others have taken a rather more activist stance in calling attention to humans rights violations and making serious accusations, such as the falsos positivos. Tragically, many of these organizations have been blackmailed or threatened and some of their members have been forcibly disappeared or even killed – violations which the NGO network on human rights has constantly denounced.

The relationship between civil society organizations and the government has not been easy, especially for foreign NGOs. During president Alvaro Uribe’s term in office many were expelled. The official stance in taking this decision was that NGOs were intervening in national matters and risking national security. In some cases the president also accused them of helping terrorists, or even of being terrorist agencies in disguise. At the time the decision was considered drastic, even desperate, but in 2006, a scandal related to NGO participation in the conflict showed that there were indeed reasons to be skeptical about the way NGOs functioned in the country.

Colombia reacted harshly to the news that a Danish private organization called Fighters and Lovers, was selling online T-shirts alluding to the guerrilla group FARC (Fuerzas Armadas Revolucionarias de Colombia), and was actually supporting the illegal armed group as a percentage of the sales went to aid it financially. After a strong diplomatic effort, and in the light of the fact that the United Nations does not allow any NGO to advocate illicit activities, the Danish government agreed to prosecute the people implicated. This outcome was widely rejected by Colombians who said that their own government should have the right to prosecute such a felony.

Last year, another event occurred when a group of activists congregated outside a military base and tried to block the entrance. They rejected the bilateral agreement between Colombia and the United States whereby the latter is allowed to use 7 military bases in the country within the framework of bilateral cooperation to halt drug trafficking and fight terrorism. Once more, the government asserted its sovereign right to enter into treaties with whomever it considered necessary and on whatever issue was relevant to national security and national interest. This episode is a perfect illustration of the clash between sovereignty (the right of a state to conclude secret security agreements) and globalization (NGOs political stance, and the people’s indignation over U.S. interference and dependence – regardless of which tribe or region they came from, they were united in demanding a more peaceful and social approach to problems such as drugs and terrorism).

In Colombia, the work of local NGOs, foundations and other civil initiatives has been vital not only in making people aware about certain “truths” that sometimes are hidden but also in teaching the government to be more transparent and accountable.

Colombianos y Colombianas por la Paz is a symbol of civil organization. They advocate and work for the unilateral release of kidnapped people. During the past government (when many kidnapped people were set free or rescued by the military forces) they played a key role in the negotiations, not least of all by rejecting armed forces rescue interventions that endanger the lives of captives.

Corporación Nuevo Arco Iris and NGOs/think tanks engaged in political action for peace and development have made serious accusations against the government’s citizen security policy and the demobilization of paramilitaries. They have brought to light that former paramilitary who have put down their weapons in line with the Ley de Justicia y Paz (the law that grants them freedom from prosecution and reinsertion into civil society if they cooperate with the government and judiciary to clear up the facts of their armed action, on condition that they hadn’t committed any crimes) are not abiding  by the requirements and are in fact directly responsible for the violence and killings in the cities, and are linked with the BACRIM (criminal bands).

In general there is the perception that civil society organizations are helping people to lose their fears about speaking their minds and helping them learn about their rights. But far too many people are still just too plain scared to come forward.

There is much criticism made about all civil society organizations – that they use people only as fundraisers, that they are closely linked to corruption or government interests, that they are just outsiders who don’t understand local realities and that they are implicated in illicit activities. Even so, we must not forget that they are also a very important alternative means of participation.  Even if they fail to fulfill their mission, or are ineffective in trying, at least they add an important ingredient to the strengthening of  civil society and the accountability of government. Even if they are not perfect, they are here to stay, and are crucial for development and good governance.

Furthermore, they are also the 21st century emblem of democracy: unlike traditional political rights, you don’t have to be of a certain age or be a citizen in order to participate. You can be a part of something that goes on miles away. Governments will have to learn to deal with this.