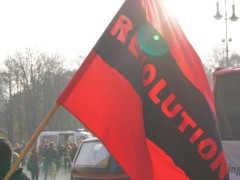 Berliners are also taking part in the global Occupy Wall Street movement. But the Berlin Revolution will have to wait a little… The relatively good economic situation means the masses of the Precariat are not yet on the streets and so far most involved appear to be professional activists.

Berlin, the 5th of November 2011, around 3 pm. In front of the German Bundestag, about one hundred people have met to protest and participate in an open assembly, the “asamblea” in reference to the Spanish indignados movement. The little crowd is colourful, some brought their guitars and play committed music, others carry placards against banks and capitalism. A few wear Anonymous masks. Anarchist and revolutionary flags wave in the air, but none from political parties. Only the German left-wing socialist Die Linke seems to be present with an activist distributing pamphlets.

But he isn’t alone doing so, Matthias brought some fliers too. They call you to “be the change you want to see in the world”. This 21 year old student comes regularly to the meetings. He tells me that the movement doesn’t need to be structured or to have a worldwide, common program. “It is all about empowering people. I’m not here to give answers, I just want these passers-by to stop, forget their consumerist attitude for a while, and participate.” With some friends, he mounted a free expression board where anyone can leave a message on the matters he is most concerned about.

What people write ranges from condemnations of racism to the denunciation of the consequences of the financial crisis. Some message are against the influence of banks on politics or attack the waste of food. Many call citizens to act, get informed and stay aware of what their governments are deciding. “These are the topics which we discuss here. These are the matters where a change has to be done to give the whole world a better future,” says Matthias.

Thirty new demonstrators join the crowd. They participated in a parallel demonstration calling for a basic income guarantee. Some dadaist actors also arrive. They pretend to be part of the “richest 1%” and provoke the demonstrators. They shout: “we are going shopping! And what do you do?!” Most of the assembly is amused, some applaud, others answer “we are the 99%!”. The atmosphere is cheerful.

The upper 1% also demonstrates: "Capitalism, because I'm worth it!"

The assembly is an open event. Anyone can talk and make suggestions. As the participants don’t use microphones, the ones sitting near the speaker repeat his words, which get repeated by their neighbours and so on, in a kind of bush telegraph. Sadly the message is sometimes difficult to understand. Most speakers criticise wealth as unique aim in life and ask for a radical change. One speaker calls for solidarity with Greece. Others suggests actions or ask how to get the movement to be more numerous. Matthias reminds me of the next big meeting. This time it will be a global gathering, on the 11 of November at 11:11. ”It will be bigger than the 15th of October!”

The asamblea gathers symbolically in front of the German Parliament.

I make my way home with mixed feelings. Even if these assemblies have been taking place in Berlin for more than a month, no substantial political movement is coming out of it. And the people I saw seemed quite different from the ones I saw during indignados demonstrations in Spain. In Berlin, most participants seem to be regular activists, who had already been involved in some political organisation, and who try to bring the OWS hype to the German capital. Naturally, these activists are also present elsewhere, they are the ones taking initiative, doing the organisation work. But I didn’t see the masses of interns, precarious workers or unemployed, which don’t usually get involved in politics. In Berlin, the movement doesn’t reach more people than the usual clientele.

But this difference lies surely in the structural characteristics of German society. Even if the economic situation in Berlin is not as good as in the whole country (12,5% unemployment, compared to 6,5%), it is not comparable to the situation of deeply indebted countries. Certainly, in Germany also, there are a lot of problems, which need to be taken care of, in the economic as well as in the political sphere. Since decades, the proportion of working poor has been rising, an ever greater number of retired people have small jobs because they don’t manage to live with their pension. In the political sphere, Germany’s most recent arms deal with Saudi Arabia, consisting of the sale of 200 tanks, could also be easily criticised. But it doesn’t seem to be enough to bring the people into the streets.

We have to be lucid. The biggest OWS-indignado demonstrations occur in the countries which have been worse hit by the financial crisis. The democratic deficits and financial tricks, which the movement blame, have already been existing for decades. Now, massive demonstrations occur because many don’t get a piece of the cake anymore and, only secondly, because democracy is defective. In Germany, working poor are working, they have no time for demonstration, unlike unemployed, and the overall economic situation is, still, satisfactory. Let’s see if the 11th of November proves me wrong.